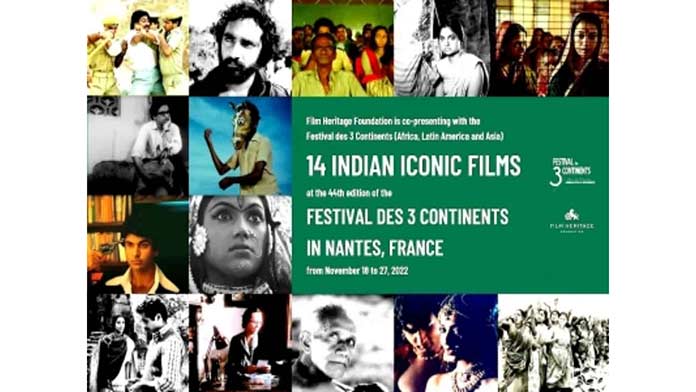 An assortment of 14 Indian films from the 1970s and the 1980s will be screened at the upcoming 44th edition of the prestigious Festival des 3 Continents which is set to be held from November 18 to November 27, 2022 in Nantes, France.
The special section at the festival will also highlight the finest films dating back to the 1970’s and 1980’s from Africa, Latin America and Asia in addition to the Indian films.
Among the stalwart Indian directors whose films will be screened are Ritwik Ghatak, Aravindan Govindan, ‘Amma Ariyan’ director John Abraham and Saeed Akhtar Mirza.
The Indian films that will be screened at the prestigious festival include ‘Thamp’, ‘Kummatty’, ‘Agraharathil Kazhuthai’, ‘Amma Ariyan’, ‘Thaneer Thaneer’, ‘Titash Ekti Nadir Naam’, ‘Ashad Ka Ek Din’, ‘Khandhar’, ‘Om-Dar-B-Dar’, ‘Hun Hunshi Hunshilal’, ‘36 Chowringhee Lane’, ‘Utsav’, ‘Arvind Desai Ki Ajeeb Dastan’ and ‘Disha’.
Reacting to the development, renowned filmmaker and author Saeed Akhtar Mirza said: “I am honoured that my film ‘Arvind Desai Ki Ajeeb Dastan’ has been selected to be screened at the prestigious Festival des 3 Continents in France. I am looking forward to presenting my film forty-four years after its release to an international audience at a festival that showcases the best of cinema.”
Film Heritage Foundation, founded by filmmaker and archivist Shivendra Singh Dungarpur, is co-presenting and programming Indian films for the Classics section.
“I would like to thank the Film Heritage Foundation and its director, Shivendra Singh Dungarpur, for making this happen,” Mirza further stated.
The Indian delegation travelling to France this year for the festival comprises Shivendra Singh Dungarpur, Saeed Akhtar Mirza, Sai Paranjpye and Sanjiv Shah to present these films.
Shivendra Singh Dungarpur, Director, Film Heritage Foundation, said in a statement:
“The selection reflects the complexity and diversity of Indian cinema and we have attempted to capture in a microcosm the vast breadth of Indian cinema. These radical filmmakers who rebelled against the constraints of commerce and created films with an artistic and political impact have left a legacy that must be cherished and revived.”
“This celebration of the rebellious poets of Indian cinema in France reaffirms Film Heritage Foundation’s commitment to the preservation and restoration of India’s rich film heritage, especially those films that won acclaim, but live on the fringes of the mainstream, and hence are in even greater danger of disappearing as the commercial world turns its backs on them,” Dungarpur added. (IANS)
A pillar of cinephilia for more than 40 years, the 10-day-long Festival des 3 Continents enjoys a long-standing legacy of discovering some of the greatest names in international cinema before their mainstream recognition including the likes of Hirokazu Kore-eda (Japan), Souleymane Cisse (Mali), Hou Hsiao-hsien (Taiwan), Abbas Kiarostami (Iran), Wong Kar-wai (Hong Kong), Jia Zhang-ke (China) and Wang Bing (China) amongst others. In 2006, for the first time in the world, the Festival des 3 Continents presented the complete Satyajit Ray film collection.

Previous article
Taylor Swift drops ‘anti-fat’ frames from ‘Anti-Hero’ music video
Next article
Will Musk become the only face of communication for Twitter like Tesla?
Must Read