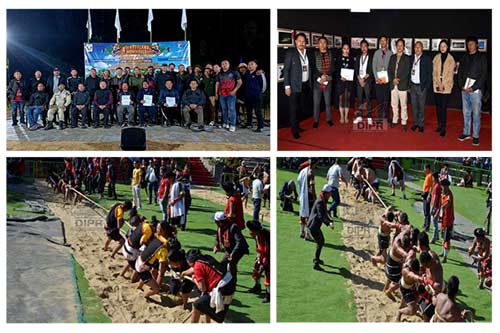 The 23rd edition of the Hornbill International Festival 2022 entered its 8th day on Thursday at the Heritage Village Kisama. Various activities such as Nagaland Hornbill Angling Competition, Prize distribution of Hipfest 2022, Tug of War, etc marked the eight day of the ongoing 10-day festival.

The 4th Nagaland Angling Festival organised by Department of Fisheries & Aquatic Resources in collaboration with Anglers Association Mokokchung (AAM) was held at Star Fisheries, Japu village, Mokokchung on December 6 and 7.
Additional Deputy Commissioner, Mangkolemba, T. Lankosen Tsanglao who was the special guest congratulated the Department of Fisheries & Aquatic Resources and AAN for successfully organizing the 4th Angling Festival. He also encouraged the village councils to focus on preserving the rivers and the forest resources.
Director of Fisheries & Aquatic Resources, Rongsenungba, emphasized on promotion of angling as a sport in Nagaland.
He maintained that proper attention should be given to the sport as it helps in conserving and preserving the environment and rivers as a whole.
Chairman, Japu Village Council in his short speech thanked the organizers and the participants for organizing such a programme in the village and assured that the people of the village would always welcome and cooperate for such activities.
The programme was chaired by joint director, Fisheries & Aquatic Resources, Neitho Kuotsu, welcome address was delivered by president, AAM, Moatoshi Longkumer, general secretary, Anglers AAN, Mhonbemo Ngullie, presented the prizes to the winners while secretary statistics AAN, Mon Gurung proposed the vote of thanks.
In the Angling competition, Kawoto Chishi bagged the first prize and received a cash amount of Rs 1 lakh with certificate; the second prize was adjudged to James who also received Rs 50,000 while Mosem stood third and received Rs 30,000. There were 10 consolation prizes: Imtiwabang, Taku Imchen, Mon Gurung, Merang, Kibo, Chubatemjen, Lawrence, Akum, Bendangmoa and Bendangsunep

The prize distribution for the Hipfest 2022 Photo competition was held on the 8th day of the Hornbill Festival at Kisama organised by the Department of Information & Public Relations in collaboration with the Art & Culture Department.
Joint director, Information & Public Relations, I. Simon Teilia graced the function as the special guest and gave away the prizes to the winners.
In senior category, Tshetshulo Naro from Nagaland bagged the first prize while Irengbam Momocha Singh from Manipur and Pelevizo Meyase from Kohima bagged second and third positions respectively. The winner pocketed a sum of Rs 25,000/- while the second and third place won Rs. 20,000/- and Rs 15,000/- respectively.
In the junior category, Aiden from New Horizon School, Dimapur bagged the first position, Avidi Anar from Dimapur and Mezhuni from Greenwood School, Dimapur came in second and third respectively.
They were awarded Rs.10,000/-, Rs.7,000/- and Rs 5,000/- respectively while consolation prizes were awarded to Parvej Akhtar from Kolkata, Pelevizo Meyase from Kohima, Monalisa Kar from Kolkata and Mezizo Swiho from Kohima with Rs 5,000 each. The panel judges were Zhazo Miachico, Merimvu Doulo and Jan Skwara from Poland.

The Department of Youth Resources & Sports also organized Tug of War at the Main Arena where Chakhesang Cultural troupe won both the men and women category and walked away with a cash prize of Rs. 20,000/- each.
The Angami cultural troupe and Pochury cultural troupe came in second in men’s and women’s category respectively and were awarded Rs.15,000/- each.