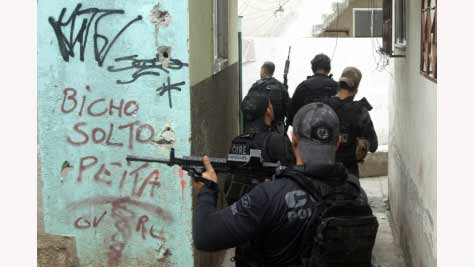 At least five people were killed and three others injured in an intense shootout between police and suspected drug traffickers in a favela, or slum, in Rio de Janeiro.

The dead and injured were suspected drug traffickers, Xinhua news agency quoted the police as saying.

The shootout took place on Monday after Rio police intelligence services were informed that a group of drug traffickers were set to invade the turf of a rival faction in the favela.

According to police, 26 people were arrested after the shootout.

In addition, weapons, including a grenade, a tonne of marijuana and 20 stolen vehicles and motorcycles were seized.

The shootout forced the closure of 35 schools, four healthcare centre and a university campus.

It also paralysed traffic on the Red Line expressway, one of Rio’s main access and exit routes.

Political parties get into huddle for finalizing candidates, seat distribution