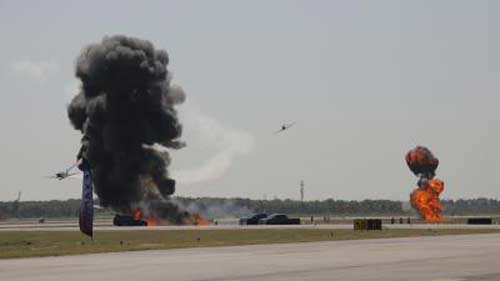 Six people were killed after two WWII aircraft collided in midair on Saturday during an air show in the US city of Dallas, authorities said on Sunday.

“According to our Dallas County Medical Examiner, there are a total of 6 fatalities from Saturday’s Wings over Dallas air show incident,” Dallas County Judge Clay Jenkins tweeted.

Videos on Twitter showed that following the collision, the two planes rapidly crashed to the ground, causing a large fire and plumes of black smoke, Xinhua news agency reported.

Jenkins said authorities are continuing to work to identify the victims.

“A Boeing B-17 Flying Fortress and a Bell P-63 Kingcobra collided and crashed at the Wings Over Dallas Airshow at Dallas Executive Airport in Texas around 1:20 p.m. local time Saturday,” said a Federal Aviation Administration statement after the crash.

Hank Coates, president of the Commemorative Air Force, which owned the planes and put on the airshow, told local reporters that a B-17 Flying Fortress bomber typically has a crew of four to five people, and a P-63 Kingcobra fighter plane has a single pilot.

Coates said no paying customers were on the aircraft, adding that highly trained volunteers fly their planes, often retired pilots.