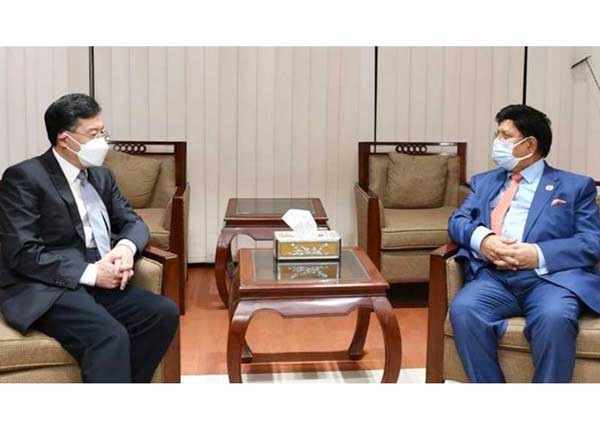 The Bangladesh-China alliance is not new. The path that connected Bangladesh with China is called the Silk Road, which is famous in history as the Silk Road. Since China and Bangladesh are both coastal countries, the exchange between them by sea has been excellent since ancient times. China and Bangladesh established diplomatic relations in 1976. Since then, China has invested in and implemented a slew of coal-based power projects.

Bangladesh has conveyed to China that it maintains a balanced foreign policy and walks together with all the countries while reassuring Dhaka’s support to Beijing.

“We believe in one-China principle. We maintain a balanced foreign policy. This is our principle. We will extend our support (to China) time to time,” Foreign Minister Dr AK Abdul Momen told reporters on Tuesday as conveyed to his Chinese counterpart.

The two Foreign Ministers had brief meeting at the VIP Lounge of the airport and discussed issues of mutual interest.

While briefing the media at the airport early Tuesday, Momen said he raised the huge trade gap issue with China.

He said though there was a decision of duty free and quota free facilities for Bangladeshi exports, it has not been implemented yet fully.

China-Asia’s largest economy, has decided to give duty-free export to 98 percent of Bangladesh’s products, including leather and leather goods. 383 new items were added to the list. This facility will expand the export trade. China will also increase investment in Bangladesh. It will produce products here which will also create employment opportunities for Bangladesh. The trade deficit between the two countries would be reduced.

At the request of Bangladesh, China signed the letter of exchange. After lengthy negotiations, on June 17, 2020, China issued an order granting Bangladesh unconditional access to 97% of its products (6,256 items) duty-free.

As a result, all potential products of Bangladesh will get duty-free quota-free access to the Chinese market, effective July 1 of that year.

Now China should implement this and Bangladesh should benefit from this offer if it utilizes this properly.

Businesses are yet to take advantage of the DFQF facilities in the Chinese market, Momen mentioned, seeking measures from the Chinese side.

Momen described the visit of Chinese President Xi Jinping to Bangladesh in 2016 as a milestone but mentioned that many decisions in terms of investment are yet to be implemented.

The Foreign Minister of Bangladesh also mentioned China’s involvement in a number of important development projects including rail link of Padma Bridge.

He also thanked the Chinese government for its support to Bangladesh during Covid-19 pandemic. The Chinese Foreign Minister invited Momen to visit Beijing at a mutually convenient time.

In reply, Momen also invited his Chinese counterpart to come again for a longer stay.

Foreign Minister Momen saw off his Chinese counterpart at Hazrat Shahjalal International Airport at 2:50 am on Tuesday.

Although it was not an official visit to Bangladesh, but the Chinese foreign minister would make a stopover here on his way to another destination. Qin Gang, who until recently was ambassador to the US, has started his term with a weeklong trip to five African countries.

To “deepen the China-Africa comprehensive strategic and cooperative partnership” and boost friendly cooperation between China and Africa, Foreign Minister Qin Gang will visit Ethiopia, Gabon, Angola, Benin, Egypt, the African Union Headquarters and the League of Arab States Headquarters upon invitation, from January 9 to 16, 2023.

According to the Observer Research Foundation, Bangladesh received a net FDI of US $1.159 billion from China in FY-19, making it the top receiver in South Asia. Henceforth, one can observe that the ties between Bangladesh and China increased exponentially after Chinese president Xi Jinping visited Dhaka in October 2016. As per many reports, the Chinese President and Prime Minister Sheikh Hasina inked 27 agreements worth billions of dollars, elevating their relationship from a “comprehensive partnership of cooperation” to a “strategic partnership of cooperation”. Prime Minister Sheikh Hasina committed to enhancing the country’s economy after Covid-19 and achieving the status of a developed nation by 2041 at the 76th United Nations General Assembly (UNGA). In 2015, China surpassed India as Bangladesh’s largest trading partner. China’s expanding engagement with Bangladesh is built on stable economic ties and Chinese infrastructure assistance. Dhaka has welcomed Beijing’s cooperation as the two sides agreed to expand cooperation on trade, defence, and infrastructure projects, further strengthening China-Bangladesh ties.

The implementation of the promised projects should gain pace

China made a commitment to provide Tk 1,700 billion for the implementation of 27 projects. Three years have already elapsed, but loan agreements have been signed to merely fund for these projects.  During Chinese president Xi Jinping’s visit to Bangladesh in October of 2016, some 27 projects were finalised. The implementation of these projects was supposed to be completed by 2020. Only 14 months are left.

The joint working group (JWG) consisting of officials of two countries should meet as early as possible to find a solution to the delay in implementing projects. The JWG was formed during prime minister Sheikh Hasina’s visit to Beijing in July 2019 to find out the reasons behind the delay. We hope the implementation of the projects will gain pace following the recommendations of the JWG.

With 2023 looking to be a gloomy year for economies, businesses in Bangladesh are cautiously optimistic that China’s decision to open its trading doors to the world after 1,016 days of a strict “zero-Covid” policy will ease supply chain woes and boost business.

However, as China, the workshop of the world, opens up its borders on Sunday, experts said there are concerns about whether the spillover effects of the decision may disrupt the world economy.

Entrepreneurs and experts opined that the reopening might create more export opportunities for Bangladesh and help it procure raw materials from its most significant source. Additional demand for oil, gas and other essential commodities in global markets will also be created.

Bangladesh plays a significant role in trade relations with both India and China due to its geopolitical location. In recent years, China has stepped up its investments in Bangladesh in an effort to strengthen bilateral ties. Bangladesh’s total exports to China reached $38.959 million in February 2021, according to CEIC data.

Until now, Bangladesh is considered to be the second-largest recipient of Chinese loans under the Belt and Road Initiatives (BRI) after Pakistan. China has also stepped up its investments in infrastructure, which is worth $10 billion in Bangladesh. Also, as per sources, Bangladesh is set to receive an investment worth $40 billion from China under a bilateral partnership. To meet Bangladesh’s growing energy needs, China has offered to construct nuclear power plants in Bangladesh. Moreover, China has exported refined petroleum worth $861 million, light rubberized knitted fabric worth $749 million, and light pure woven cotton worth $170 million to Bangladesh. According to Dr Ma Razzaque, the head of Research and Policy Integration for Development (RAPID), Bangladesh could make $25 billion if it could acquire even 1% of China’s imports. Bangladesh’s principal export categories, such as ready-made clothes and others such as leather goods, jute and jute goods, agricultural products, frozen and live fish, pharmaceutical products, plastic, sports goods, handicrafts, and tea, have a great competitive advantage in the worldwide market.
“Bangladesh is important to China due to its geopolitical location, and as a result, investment has steadily increased. For example, total business was approximately $14.69 billion in 2018-2019, whilst investment was around $12.8 billion in 2017-2018. However, investment was reduced to $12.5 billion in 2020-21 owing to Covid-19.

In other areas, the pace of cooperation between the two countries has increased with the visit of Chinese President Xi Jinping to Bangladesh in 2016 and Prime Minister Sheikh Hasina’s visit to China in 2019. During the two visits, various agreements and memoranda of understanding were signed between the two countries in various fields including energy, technology, and infrastructure development. The country will invest about $25 billion in various sectors including economic infrastructure development in Bangladesh in the light of the One Way One Region programme. China has been assisting Bangladesh in various developmental activities including the construction of the country’s first tunnel on the Padma Bridge and Karnafuli River, and construction of thermal power plants in Chittagong and Khulna.

It was expected that with the announcement of July 1, 2020 for more duty-free quota-free access of Bangladeshi products to the Chinese market, bilateral trade, especially export from Bangladesh will be revamped. That did not happen. Bangladesh has huge trade deficit with China.

Despite the fact that bilateral trade favours China heavily, Bangladesh has enormous potential that has yet to be realised. With the new extension of duty-free and quota-free access to China, we need to redouble our efforts with required administrative, regulatory and infrastructural support.