A political spokesman with a difference 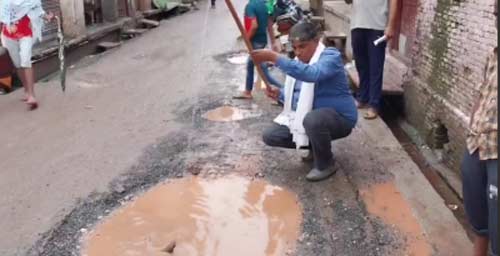 A Samajwadi spokesman has found a novel way of attracting the attention of authorities concerned towards people’s issues.

Abdul Hafiz Gandhi does not stage demonstrations or submit memorandum. Instead, he chooses innovative ways to attract the attention of administration to his demands.

For instance, he planted paddy in the potholes of a road.

Then he played ‘been’ – used by snake charmers – in front of a buffalo to show that the PWD does not pay attention to problems.

He took out a 16 km padayatra from Onghat to Etah with torch and lantern in his hands to search for a road in the potholes.

During monsoons, Abdul Hafiz Gandhi, 43, went to a road in Ganjdundwara in Kasganj with a handful of live fish and a fishing rod. He put the fish in rainwater-filled potholes and then started catching them. He got his antics filmed on his smartphone and posted the video on his YouTube channel, Twitter, Instagram, and WhatsApp groups.

Within days, the Ganjdundwara Nagar Palika ensured the road was repaired.

Gandhi, who is a Samajwadi Party leader, says he has kept the campaign “apolitical”.

He told IANS, “The idea is only to raise public issues and make the authorities take note and redress them. I do not engage in any party politics, political tug-of-war or slandering while I do this video story-telling on civic issues.”

After his series of videos on the lack of amenities at the Gadka railway station (a small station) 28 km from Kasganj district headquarters and tagging the Railway ministry to videos story on his verified Twitter handle, the Railways responded within three days and sent a team to the station for an inspection, he claims.

“Already, stone benches have been installed at the station for travellers, a drinking water facility and lighting are being worked upon and a shed will soon be constructed near the ticket window,” he says.

Gandhi says, “Metaphors and symbolism work faster sometimes as people tend not to pay much attention to petitions and memorandums.”

Talking about the significance of his ‘video petitions’, Gandhi says: “This is far better than the written applications that often get buried in piles of letters or get lost. Video petitions create a far greater impact on the authorities as well as the general public.”

Once a grievance is redressed, Gandhi makes another video to thank the authorities–district administration, municipality, PWD, Railways, irrigation department etc — and acknowledging to the public that the work has been done.

He uses his smartphone’s back and front cameras to do the story-telling. Occasionally, he also asks a bystander to hold his phone while he speaks into the camera.

Recently, in an action over illegal activities of a person, the Kasganj district administration sealed two colleges with 1,700 students and a cold storage stocking 10,000 bags of potatoes of the farmers.

NATO urges Russia to respect nuclear pact with US