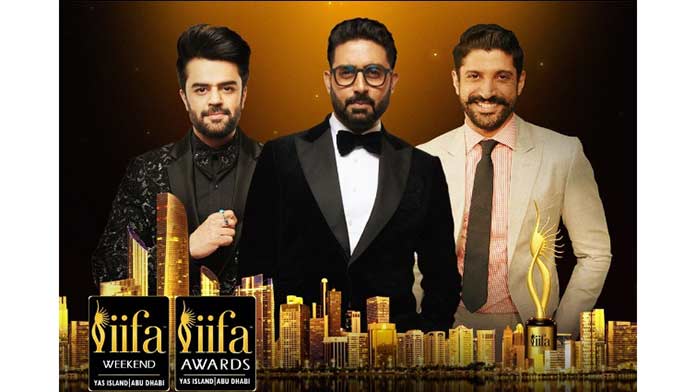 Bollywood stars Abhishek Bachchan, Farhan Akhtar and popular TV presenter Maniesh Paul will serve as the hosts for the IIFA Weekend and Awards, the International Indian Film Academy (IIFA) announced on Monday. The 23rd edition of the award gala will once again be held in Yas Island, Abu Dhabi in the UAE from February 9 to 11, 2023.
Noted film personalities including Salman Khan, Varun Dhawan, Karan Johar, and Kriti Sanon are also set to be part of the event.
“I’m ecstatic to be hosting the 23rd edition of IIFA at Yas Island, Abu Dhabi. IIFA is like family to me. I am looking forward to entertaining, meeting fans, and connecting with them globally,” Bachchan said in a statement.
Akhtar said IIFA is the only global platform that has been able to travel around the world. “It has bought cinema lovers closer from all across the globe. As always, I am looking forward to the next edition of IIFA Weekend and awards and am excited to be co-hosting the 23rd edition at Yas Island, Abu Dhabi,” he added.
Paul, who had also emceed the 22nd edition of IIFA Weekend and Awards, said he is excited to take the stage once again.
“It’s always fun and the reaction we receive from the live audiences is surreal. It’s going to be bigger and brighter with my super amazing co-hosts. Looking forward to enjoying it and having a lot of fun,” the “Jugjugg Jeeyo” actor said.
IIFA 2023 will be held in collaboration with the Department of Culture and Tourism – Abu Dhabi (DCT Abu Dhabi) and Miral, one of the leading creators of immersive destinations and experiences of the UAE capital.