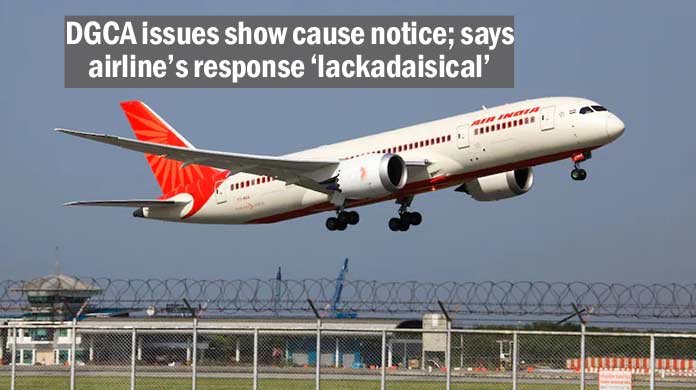 Aviation regulator DGCA has issued a show cause notice to Air India after finding the airline’s response as “lackadaisical and delayed” regarding two of passenger misbehaviour incidents onboard a flight from Paris to New Delhi last month.
This is the second time in less than a week that the Directorate General of Civil Aviation (DGCA) has issued a show cause notice to the Tata group-owned Air India. The latest show cause notice, where the airline has been given two weeks time to respond, is in relation to two incidents onboard the Paris-New Delhi flight on December 6, 2022 that were not reported to the regulator.
In one incident, a drunk passenger was caught smoking in the lavatory and was not listening to the crew. In the second incident, another passenger allegedly relieved himself on a vacant seat and blanket of a fellow female passenger when she went to lavatory, DGCA said in a statement on Monday.
“Air India didn’t report the incident until DGCA sought the incident report from them on 05.01.2023. After perusal of the reply submitted by Air India through email dated 06.01.2023, prima facie it emerges that provisions related to handling of an unruly passenger… have not been complied with. It has been noted that the response of the airline has been lackadaisical and delayed,” it said.
The watchdog has issued the show cause notice to the accountable manager of Air India as to why enforcement action should not be taken against them for dereliction of their regulatory obligations.
“However, to follow the principles of natural justice, they have been given two weeks time to submit their reply to DGCA and based on that further action will be taken,” the statement said.
On January 5, DGCA issued notices to the officials and crew of the New York-Delhi flight, asking why action should not be taken against them for “dereliction” of duty while handling the November 26 ‘urination’ incident.
“The conduct of the concerned airline appears to be unprofessional and has led to a systemic failure,” the regulator had said about the incident. An inebriated man allegedly urinated on his female co-passenger, a senior citizen in her seventies, in the business class of the New York-Delhi flight on November 26, 2022.
With respect to the November 26 incident, DGCA has issued show cause notices to the accountable manager of Air India, its director in-flight services, all the pilots and cabin crew members of that flight as to why enforcement action should not be taken against them for dereliction of their regulatory obligations.
On January 8, Tata Group Chairman N Chandrasekaran admitted that Air India’s response to the incident of a drunk passenger urinating on a woman on one of its international flights last year should have been “much swifter”.
“We fell short of addressing this situation the way we should have,” he said in a statement.
Meanwhile, in the statement issued on Monday, DGCA also mentioned about the existing norms related to reporting and acting against unruly passengers.
Under DGCA rules, the airline concerned is responsible for informing the regulator within 12 hours of landing of the aircraft in case of any incident of unruly passengers/ passenger rage/passenger misconduct reported in their flight, the statement said.
Besides, the airline concerned has to set up a three-member internal committee. It will have a retired District & Session Judge as Chairman, a representative from a different scheduled airline as a member and a representative from a passengers association or consumer association or retired officer of Consumer Dispute Redressal Forum as the third member.
The committee can decide the duration of flying ban on the unruly passenger within 30 days and there could be a life time ban.
During the pendency of the decision by the committee, the airline concerned may ban such unruly passenger from flying for a period of up to 30 days, as per the rules.
After the committee takes the decision, the airline should maintain a database of all such unruly passengers and inform the same to DGCA, which is the custodian for maintaining the ‘no-fly list’.