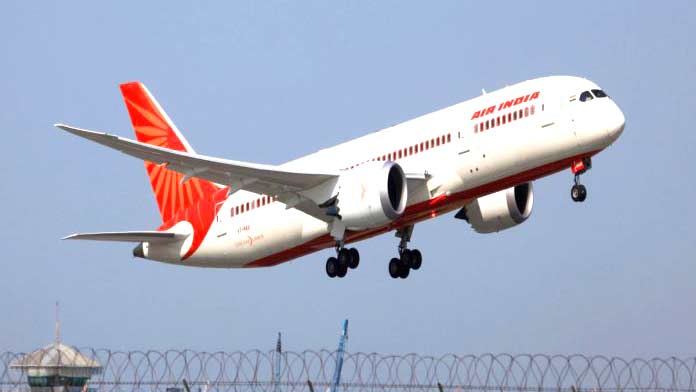 Air India on Wednesday said it has imposed a 30-day flying ban on a passenger who had urinated on a female co-passenger onboard a flight from New York to Delhi in November last year and set up an internal panel to probe whether there were lapses on the part of their crew in addressing the situation.
Aviation regulator DGCA said it has sought a report from the airline on the incident, which happened on November 26 and will “take action against those found negligent”.
Air India said it has filed a police complaint about the incident but did not specify when the 30-day flying ban on the passenger came into effect.
Delhi Police on Wednesday said several teams have been formed to catch the passenger and registered a case against the accused.
Based on the complaint given by the victim, Delhi Police has registered a case under sections 294 (does any obscene act in any public place), 354 (Assault or criminal force to woman with intent to outrage her modesty), 509 (word, gesture or act intended to insult the modesty of a woman) and 510 (Misconduct in public by a drunken person) of the Indian Penal Code and other relevant section of Aircraft rule.
Meanwhile, the National Commission for Women has written to the Air India Limited chairman to intervene in the matter. It said the action violated the woman’s right to live a life of dignity and safety.
Airlines have the power to impose a flying ban on an individual for unruly behaviour for up to a lifetime. While Air India has banned the passenger from taking its flights, other carriers can decide whether a flying ban should be imposed on the individual concerned.
On November 26, an inebriated male passenger urinated on a female co-passenger during a flight from New York to Delhi, according to reports.
Without mentioning the details about the incident, an Air India spokesperson on Wednesday said the airline has taken a very serious view of the incident, where a passenger behaved in an unacceptable and undignified manner on the New York-Delhi flight that caused extreme distress to a fellow passenger.
Air India has “banned the passenger for 30 days, the maximum it is permitted to unilaterally do so, and reported the matter to the DGCA for further action,” the spokesperson said in a statement.
However, Air India declined to provide details about when the flying ban was imposed.
“We have also constituted an internal committee to probe lapses on part of Air India’s crew and address the deficiencies that delayed quick redressal of the situation,” the statement said.
Further, the airline said it is also in regular contact with the aggrieved passenger and her family during the investigation and reporting process.
A senior official at the Directorate General of Civil Aviation (DGCA) in the morning said the regulator is “seeking a report from the airline and shall take action against those found negligent”. The airline had not reported the incident to the regulator earlier.
Under the Civil Aviation Requirements (CAR) issued by DGCA in 2017, regarding the handling of unruly passengers, an airline has the power to ban an individual from flying for a lifetime.
If one airline places a person on the no-fly list, then other airlines have the option of whether to impose a similar ban on the individual concerned.
The ban period varies depending on the violations being classified as Level 1, 2 or 3.
For Level 1, which pertains to unruly behaviour such as “physical gestures, verbal harassment, unruly inebriation”, the ban can be for up to three months.
The debarment will be up to six months for Level 2, which pertains to physically abusive behaviour like “pushing, kicking, hitting, grabbing or inappropriate touching or sexual harassment”.
For Level 3 when there is a life-threatening behaviour like damage to aircraft operating systems, “physical violence such as choking, eye gouging, murderous assault, attempted or actual breach of the flight crew compartment etc”, the ban can be from a minimum of two years or more without a limit, as per the norms.
The home ministry can also provide DGCA and airlines, with a list of individuals identified as national security threats for inclusion in the no-fly list under the CAR.
Against the backdrop of the Air India incident, stand-up comedian Kunal Kamra on Wednesday tweeted ‘2 Air India’s” and shared a screenshot of Air India banning him sometime back following alleged unruly behaviour onboard an IndiGo flight.
Kamra also shared a screenshot of a media report saying that Air India has banned the passenger who urinated on a female co-passenger for 30 days.