‘Aliens do walk among us’: Wasim in awe of Virat Kohli 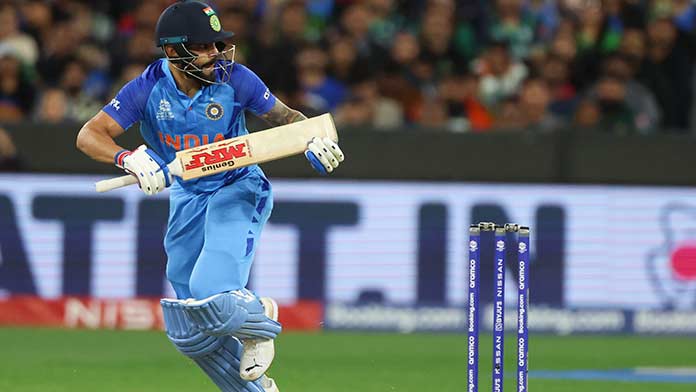 Former Pakistan captain Wasim Akram suggested Virat Kohli might be from another planet after the Indian batter’s superb half-century guided them to a four-wicket win over arch-rivals Pakistan at the Twenty20 World Cup. Man of the Match Kohli smashed an unbeaten 82 off 53 balls as India chased down 160 at a packed Melbourne Cricket Ground on Sunday. He hit four sixes, including back-to-back shots over the ropes in the penultimate over to bring India back into the game.
“Aliens do walk among us, he’s one of the best I’ve seen among the modern greats,” Akram said on Pakistani television channel A Sports.
“Not just now, he has been scoring for the last 15 years and he has the best average while chasing.”
Kohli’s sublime knock comes amid a return to form after he ended a three-year drought for an international hundred at the Asia Cup last month, smashing an unbeaten 122 against Afghanistan in the game’s shortest format.
India great Sachin Tendulkar said it must have been the best innings of Kohli’s career.
“It was a treat to watch you play, the six off the back foot in the 19th over against (Haris) Rauf over long on was spectacular. Keep it going,” he tweeted.
India Prime Minister Narendra Modi was among those praising Kohli on social media, while former Pakistan players also joined in.
“What a game of cricket we’ve just witnessed and this guy Virat Kohli is absolutely a beast,” Pakistan batter Shoaib Malik tweeted.
“You cannot compare his class to any other player in the world in white-ball cricket. He can anchor, he rotates the strike, he can hit sixes and he knows how to finish the game.”
With India celebrating the festival of Diwali, The Times of India newspaper said Kohli was “back as king” to light up the World Cup with a “cracker of an innings”.
India face the Netherlands in their second Group 2 fixture on Thursday.