Almost every child on earth will suffer from heatwaves by 2050: Unicef 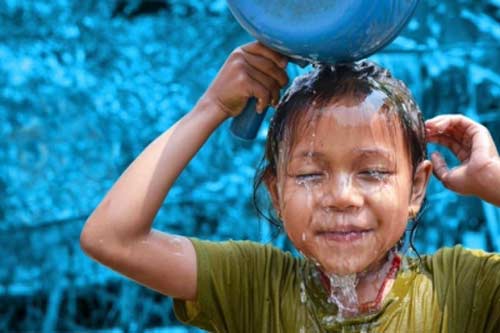 Hot weather has become a health risk for many nations, but new data shows that almost every child on earth will be affected by heatwaves by 2050, the Unicef warned in a new report.

According to Unicef, children in northern regions will face the most dramatic increases in high heatwave severity while by 2050, nearly half of all children in Africa and Asia will face sustained exposure to extreme high temperatures.

“The mercury is rising and so are the impacts on children,” Unicef Executive Director Catherine Russell said in the report, adding that year’s wildfires and heatwaves that have swept through India, Europe, and North America were “yet another sobering example of the impact of climate change on children”.

“Already, 1 in 3 children live in countries that face extreme high temperatures and almost 1 in 4 children are exposed to high heatwave frequency, and it is only going to get worse. More children will be impacted by longer, hotter and more frequent heatwaves over the next 30 years, threatening their health and wellbeing. How devastating these changes will be depends on the actions we take now.

“At a minimum, governments must urgently limit global heating to 1.5 degrees Celsius and double adaptation funding by 2025. This is the only way to save children’s lives and futures � and the future of the planet,” she added.

The data published in the agency’s report underscores that young children face greater risks than adults when faced with extreme heat events.

This is because they are less able to regulate their body temperature compared to adults. The more heatwaves children are exposed to, the greater the chance of health problems including chronic respiratory conditions, asthma, and cardiovascular diseases.

“The world urgently needs to invest in building their resilience — and in adapting all the systems children rely on to meet the challenges of a rapidly changing climate,” Unicef maintained.

Children should be protected from the escalating impacts of heatwaves, Unicef said, in a call for “urgent and dramatic emissions mitigation measures to contain global heating — and protect lives”.

Responding to the report, UN Secretary-General Antonio Guterres said: “The last seven years have been the hottest on record… The climate crisis is a child rights crisis.”

Protests in Tenkasi, TN as waste dumping from Kerala continue