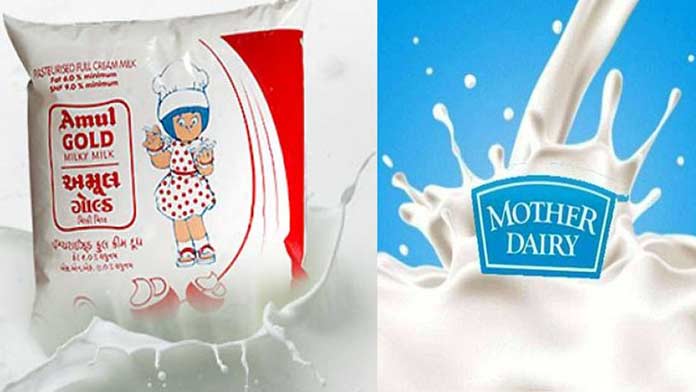 Amul and Mother Dairy have hiked milk prices by Rs 2 per litre. This is the second hike by the companies this year. The new prices will be effective from August 17.
According to India Today, the price of Amul Gold will be Rs 31 for 500 ml, Amul Taaza will be sold at Rs 25 for 500 ml, and Amul Shakti will be sold at Rs 28 for 500ml. The increase of Rs 2 per litre amounts to a 4 per cent increase in MRP which is lower than average food inflation.
Amul had hiked prices in February this year. After this, Amul Gold milk was priced at Rs 30 per 500 ml, Amul Taza was priced at Rs 24 per 500 ml, and Amul Shakti at Rs 27 per 500 ml.
This price hike is being done due to an increase in the overall cost of operation and production of milk. The cattle feeding cost alone has increased to approximately 20 per cent compared to last year, Amul said. “Considering the rise in input costs, our member unions have also increased farmers’ prices in the range of 8-9 per cent over the previous year,” Amul said in a statement.
In March, Mother Dairy increased milk prices by Rs 2 per litre in the Delhi-NCR (National Capital Region). Mother Dairy is one of the leading milk suppliers in the Delhi-NCR market and sells more than 30 lakh litres per day in poly packs and through vending machines.
A company official on Tuesday said it is “compelled” to raise its liquid milk prices by Rs 2 per litre with effect from August 17, 2022. The new prices will be applicable for all milk variants. Full cream milk will cost Rs 61 per litre from Wednesday, up from Rs 59 per litre.
Prices of toned milk will increase to Rs 51 while double toned milk will rise to Rs 45 per litre. Cow milk price have been hiked to Rs 53 per litre.