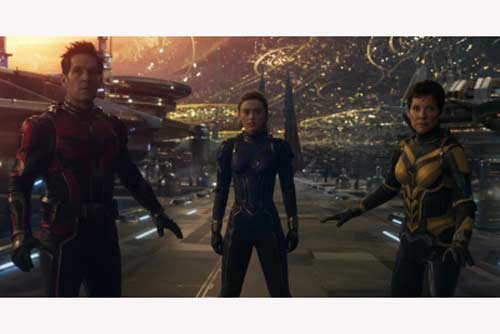 The fascination of Marvel Studios with regards to exploring different universes continues with the upcoming superhero film ‘Ant-Man and The Wasp: Quantumania’. The film’s trailer was unveiled on Tuesday.

The trailer begins with a bit of existentialism of Paul Rudd’s character of Scott Lang before he gets sucked into the quantum realm along with Hope, which “incidentally” reminds of the fair bit of warning during ‘Spider-Man: No Way Home’ which Benedict Cumberbatch’s character willfully ignores.

The film officially kicks off phase 5 of the Marvel Cinematic Universe, and shows superhero partners Scott Lang (Paul Rudd) and Hope Van Dyne (Evangeline Lilly) returning to continue their adventures as Ant-Man and the Wasp.

Together, with Hope’s parents Hank Pym (Michael Douglas) and Janet Van Dyne (Michelle Pfeiffer), the family finds themselves exploring the Quantum Realm as they interact with strange new creatures and embark on an adventure that will push them beyond the limits of what they thought was possible.

They are joined by Jonathan Majors as Kang. The film has been directed by Peyton Reed, who also directed the earlier part of the film. Marvel Studios’ trump card Kevin Feige has produced the film along with Stephen Broussard.

No marks for guessing, ‘Ant-Man and The Wasp: Quantumania’ will have a healthy dose of VFX thrown in but, will the story manage to hook the audience? The audience will get to find that out as the film drops in theatres on February 17, 2023.