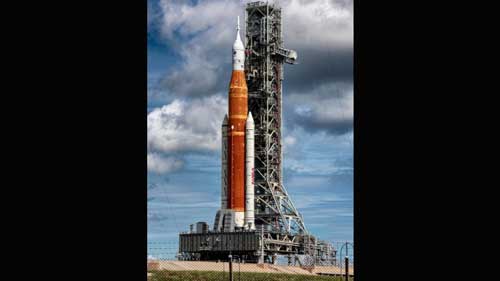 The US space agency has once again readied its Artemis I moon mission and met all objectives, including the key hydrogen leak threat which has resulted in two failure attempts.

After encountering a hydrogen leak early in the loading process with the Space Launch System (SLS), engineers were able to troubleshoot the issue and proceed with the planned activities, NASA said in a statement.

The four main objectives for the demonstration included assessing the repair to address the hydrogen leak identified on the previous launch attempt, loading propellants into the rocket’s tanks using new procedures, conducting the kick-start bleed, and performing a pre-pressurisation test.

“The liquid hydrogen leak remains manageable during the Artemis I cryogenic demonstration test. Teams warmed up the quick disconnect umbilical line and the leak then maxed out at 3.4 per cent, which is within the acceptable range to continue,” NASA said in a tweet.

The launch director confirmed all objectives have been met for the cryogenic demonstration test, and teams proceeded with critical preparations for draining the rocket’s tanks.

Teams will now evaluate the data from the test, along with weather and other factors, before confirming readiness to proceed into the next launch opportunity.

“The rocket remains in a safe configuration as teams assess next steps,” said NASA.

NASA will attempt to launch its Artemis I moon mission on September 27, with a potential backup opportunity of October 2 under review.

On September 3, NASA attempted to launch Artemis I but called it off after detecting a liquid hydrogen leak.

The US space agency on August 30 scrubbed the mission launch for the first time owing to technical glitch with one of the SLS rocket’s engines.

Artemis I is NASA’s uncrewed flight test which will provide a foundation for human exploration in deep space and demonstrate NASA’s commitment and capability to extend human existence to the Moon and beyond.