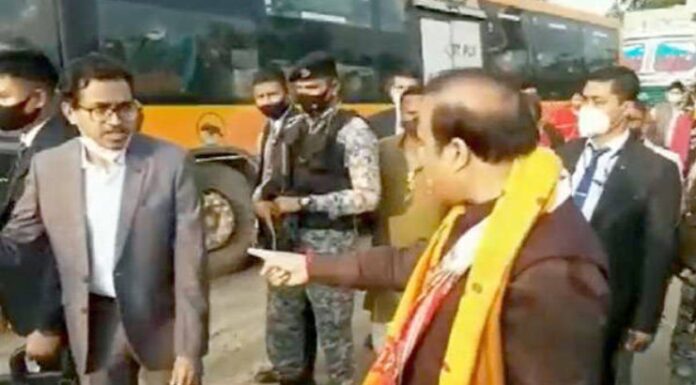 Assam Chief Minister Himanta Biswa Sarma, who earlier urged everyone including BJP leaders to move away from the Personal Security Officer culture and also drastically cut his security strength, on Saturday publicly reprimanded the Deputy Commissioner of Nagaon district for blocking the traffic on highway during his visit and directed not to repeat the same during the chief minister’s movement.

The Chief Minister on his way to an official function suddenly stopped his convoy and alighted from his car at Gumothagaon on National Highway-37 and said: “DC sahab yeh kya natak hai ? Gari kyun rukwaya hai. Koi raja maharaja jaa raha hai kya? Aisa mat karo again. Logo ko kasht ho raha hai. Gari jane do (What is this drama? Why the vehicles have been stopped? Is a king passing through here? This should not happen again. People are suffering a let. Let the vehicles go).”

After the Chief Minister’s intervention many stranded vehicles including several passenger buses had started moving. Later, Sarma tweeted: “In our state we want to create a culture where DC, SP or any govt servant/public rep-irrespective of background,intellectual capacity or popularity will work only for the people Changing babu mindset is a tough, but we are determined to achieve our goal-Janta hi Janardhan.”

Sarma had earlier announced to cut down his convoy from a fleet of 22 vehicles to seven to eight while moving in Guwahati. The Assam cabinet in a recent meeting, chaired by Chief Minister, also decided that PSO would be deployed based on core security review and constitutional post.

“Over 4,240 PSOs are now being posted with the politicians, in-service and retired officials, businessmen, surrendered militants, tea estate owners and others.

Seven plays to be staged at theatre festival inside Assam forest

13 Tips to Strengthen Your Immune System