Assassination attempt on Imran a lone-wolf attack; ‘no conspiracy’ 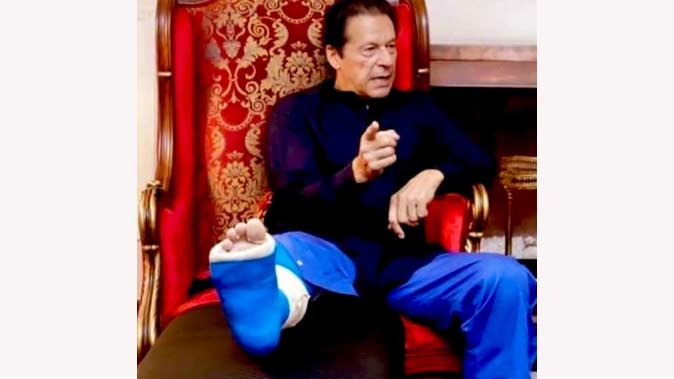 An intelligence agency report submitted to Pakistan’s federal government on assassination attempt on former Prime Minister Imran Khan “does not find any conspiracy involved” and terms it a “lone-wolf” attack, a media outlet reported.

The report says that the gunshots by the pistol were followed by SMG fire by some unknown deputed for security purposes in the rally. It says that no other associate of the assailant has been ascertained so far, The News reported.

While referring to the postmortem report, it said that the wound on the head of the only deceased in the attack was apparently caused by a rifle projectile and was not due to 30 bore or 9mm pistol fire.

As per the CTD forensic team, the report said, eight bullets hit the container-top, six bullet holes were found, whereas two bullets brushed aside the container wall.

The report said that one assailant opened fire on the container carrying Pakistan Tehreek-e-Insaf (PTI) chief Imran Khan and other leaders.

Thirteen persons, including Imran Khan, sustained injuries, whereas an individual died on the spot. The assailant Muhammad Naveed was caught red-handed from the crime scene, the media outlet reported.

“As per assessment based on information available so far, he was a self-motivated individual,” the report said.

The assailant confessed that he targeted Imran owing to his alleged wrong religious beliefs. “He had no repentance over what he did. He denied involvement or provocation by any other individual. As per the interrogators, his behaviour immediately after arrest and during interrogation was firm, confident and resolute without any repentance. He still claims that if he is released, he will kill Imran,” said the report.

The assailant was holding an automatic 9mm pistol. The assailant directed shots towards the container and emptied nearly all rounds in one go.

Reportedly, 12 empties of 9mm and two of SMG have been collected from the crime scene. On arrest, two magazines and 13 live bullets were also recovered from him.

The assailant remained in Saudi Arabia for almost eight years and returned to Pakistan in February.

Reportedly, he is a drug addict using hash or cannabis. He attended school up to Class 3 and has no formal religious education. He or his family has no considerable political affiliation, the media outlet reported, citing the intelligence report.

“The information ascertained so far suggests the incident to be a lone-wolf attack. Neither the investigation nor any information has confirmed that the assailant was accompanied by any accomplice,” the report said.

Imran has claimed that he had received information about the attack two months before it took place and that he had informed the public about it in at least two of his public addresses, Samaa TV reported.

On the suspect’s apprehension, Imran said that it was apparent to everyone that he was part of the cover-up since immediately after his video came out, it was being propagated that the attacker worked alone and that he was allegedly motivated due to religious extremism.

“The way he was talking it was apparent he was repeating like a parrot what he had been taught,” Imran said.

He added that the retrieval of different types of ammunition fired and the different directions from which gunfire came proved that despite the suspect’s claims of acting alone were false, Samaa TV reported.

Former Pak Ambassador to US and UN, Maleeha Lodhi writing in Dawn said that speculation continues to run rife about who was behind the attack on Khan’s convoy and who would benefit from it. Few believe the attack was carried out by a lone assailant. PTI leaders insist there was more than one gunman.

Compounding the mystery was the prompt confessional video of the assailant released by Wazirabad’s local police. In a polarised environment, partisanship has been dictating the response to the murderous attempt with conspiracy theories running rampant. The Punjab government has made matters worse by its inept handling of the incident, Lodhi said.

The country’s Interior Minister Rana Sanaullah Khan challenged PTI chief and former Prime Minister Imran to prove that he received four bullet wounds, saying that he will quit politics forever if he managed to do so, Express Tribune reported.

Imran was shot at and injured on Thursday evening when a suspect, standing in front of the container carrying the PTI chief and senior party leaders, showered a volley of bullets with an automatic pistol. One person died in the incident, while several PTI leaders were injured.

Immediately after the shooting, Imran was taken to the Shaukat Khanum Memorial Cancer Hospital (SKMCH) in Lahore. Dr Faisal Sultan, the chief executive officer of the hospital, said that the PTI chief was hit by four bullets to his leg.

Talat Masood wrote in Express Tribune it would be na�ve to rule out the possibility that outside elements, focused on harming Pakistan, could be involved in the murder attempt on Khan. From their perspective if this strategy results in chaos and civil war conditions, they have achieved more than what they would have through open confrontation. As events have unfolded, irrespective of their involvement or not, they are clearly one of its major beneficiaries.

The police investigation into the attack on PTI’s long march revealed that suspect Naveed is a drug addict and his statements regarding the incident are ‘doubtful’, Express Tribune reported.

According to Express News, during the interrogation the accused admitted to opening fire on the container of PTI chief Imran Khan in Wazirabad on Thursday.

In a statement to the police, the accused said that he bought 26 bullets along with a pistol through a man named Waqas from Wazirabad.

Police sources said the polygraph test of the accused could also be conducted to dig out more information.

The family members of the accused were also detained while the bullet shells had been recovered from the crime scene which will be sent for forensic examination, sources added.

During interrogation with major investigation agencies including Counter Terrorism Department (CTD), the accused revealed that first he tried to attack the PTI chief from a roof of the mosque but he was not allowed to go there due to Asar prayer, Express Tribune reported.

The accused reached the crime scene through the bypass road where he asked the people participating in the march to turn off the loudspeaker playing party’s anthem, as per sources.

According to the police investigation, the accused opened a full burst at a distance of fifteen to twenty steps from the container.

The bullets in the pistol were homemade and the weapon got jammed after he fired eight bullets.