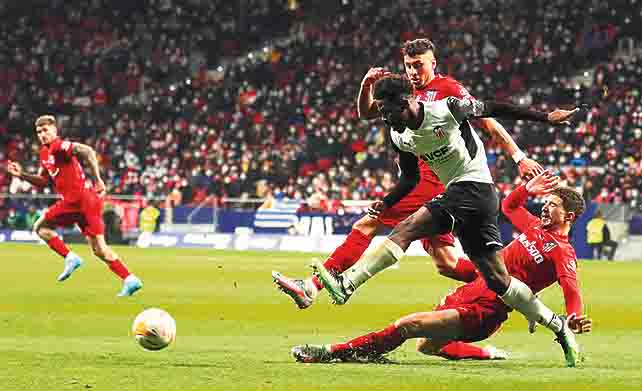 LaLiga champions Atletico Madrid snatched victory from the jaws of defeat to win 3-2 at home against Valencia, scoring two of their goals in stoppage time.
Atletico are fourth in the standings with 36 points, 13 behind leaders and city rivals Real Madrid.
Valencia took advantage of slack defending by Atletico to score twice in the first half, the first goal struck by American winger Yunus Musah in the 25th minute and the second on the stroke of halftime by striker Hugo Duro, on-loan from Getafe.
However, Diego Simeone’s team returned from the break much more determined and halved the deficit shortly after the hour mark when substitute Matheus Cunha scored from a rebound following a corner kick. Argentine forward Angel Correa equalised in the first minute of stoppage time before Mario Hermoso tapped in a low cross from Cunha two minutes later to send the home fans wild and seal an exhilarating win.
Under fire manager Simeone, who is under intense pressure to turn around his club’s fortunes following a series of bad results, entered the arena hearing his name chanted by fans who had showed up on a freezing night at Metropolitano Stadium.
Saturday’s last-gasp win will go some way in silencing the critics and fans will be hoping that it is a sign of better things to come.
The team usually known for their rock-solid defence have leaked in 26 goals in 21 games, which is already more than the 25 they conceded in 38 games during their triumphant run to the LaLiga title last season.
In becoming an indisciplined, mistake-prone unit, they have conceded the most number of goals among the top eight in LaLiga and have also won only three of their last nine games in all competitions.

I will rather die than join hands with BJP again: Nitish