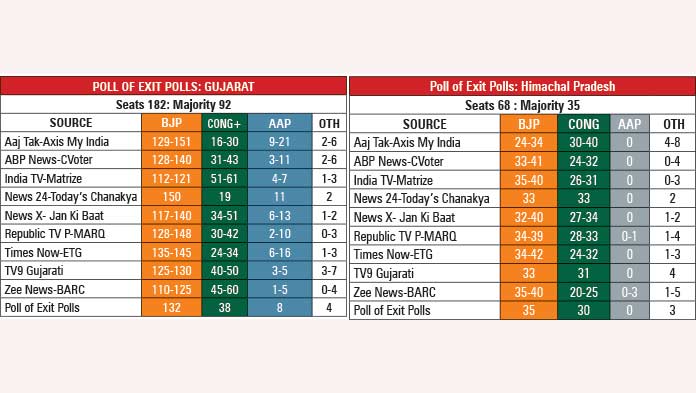 The BJP is set to sweep Gujarat and hold on to Himachal Pradesh, a poll of exit polls predicted Monday evening, reports NDTV. The results of the Gujarat and Himachal Pradesh elections will be announced on Thursday.
The BJP is likely to win its seventh successive term in Prime Minister Narendra Modi’s home state, the exit polls predicted. The poll of exit polls gave BJP 132 of 182 seats in Gujarat and the Congress and its allies 38.
That would make it the BJP’s best performance since 2002, when it won a landslide in Gujarat months after the riots in which 1,000 people, mostly Muslims, were killed.
The Congress’s tally is expected to drop significantly since 2017, when it confined the BJP to double digits (99), just seven more than the halfway mark.
The Congress, the principal Opposition party of Gujarat since 1995, upped its total from 61 to 77 to deliver its best performance since 1985, when it won a record 149 seats.
This time, the party’s campaign was listless as it prioritised Rahul Gandhi’s Bharat Jodo Yatra while AAP projected itself as the BJP’s main rival.
The BJP is likely to survive anti-incumbency in Himachal Pradesh and win a record second consecutive term, the polls say. The exit polls predict 35 of 68 seats for the BJP – barely the majority mark – with the Congress close behind at 29 seats. AAP may not even register in the state, say the polls.
Elections for the Himachal Pradesh assembly took place on November 12, while polling in Gujarat happened in two phases on December 1 and 5.