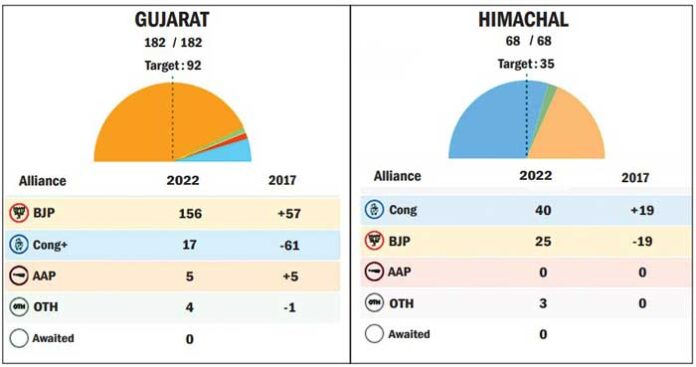 BJP has shown a dominant performance in Gujarat by sweeping the polls for a record seventh straight term with 156 seats, thereby breaking Congress’s earlier record of 149 in 1985 polls. Congress, on the other hand, has returned to power in Himachal Pradesh with a thin margin to unseat the incumbent BJP.
The Election Commission of India (ECI) has released the final data of both Gujarat and Himachal Pradesh assembly election and the result is a split between the BJP and the Congress party.
While the BJP set new records in the home state of Modi and Home Minister Amit Shah with its “historic” and “phenomenal” victory for a three-fourths majority, it lost Himachal Pradesh to the Congress after a close fight, as the hill state continued with its tradition of nearly four decades in voting out the incumbent party.
The vote share difference for the winning Congress and the BJP in Himachal Pradesh was less than one per cent, a point also noted by Modi and BJP President J P Nadda in their address to party workers at the BJP headquarters in Delhi in the evening. While the Congress, which got a simple majority, polled 43.9 per cent votes, the vote share for the BJP in the home state of Nadda was 43 per cent.
The BJP, which focused on a development agenda and overcame anti-incumbency yet again without losing an election since 1995, also equalled the Left Front’s feat of seven consecutive terms in West Bengal. The CPI(M)-led Front ruled the eastern state for 34 years from 1977 to 2011.
The BJP, which bagged 99 seats in 2017 Assembly polls with a 49.1 per cent vote share, surpassed its previous best showing of 127 seats in 2002 when Modi was the chief minister.
With a nearly 13 per cent vote share, the Arvind Kejriwal-headed AAP won only five of the 181 seats it contested.
After giving a tough fight to the BJP in 2017 Assembly polls in Gujarat by winning 77 seats, the Congress has hit a nadir in the western state where the party’s campaign, mostly shouldered by local leaders, has leaned on door-to-door canvassing for votes as its leader Rahul Gandhi chose to stay away to focus on the ‘Bharat Jodo Yatra’. Rahul had aggressively campaigned in 2017.
AAP also appeared to have played spoilsport for the Congress. With a vote share of nearly 28 per cent, the Congress won 17 seats.
In Himachal Pradesh, the Congress won 40 of the 68 seats at stake followed by the BJP, which bagged 25. Independents won three seats.
AAP, which had fielded candidates in 67 seats, failed to make a debut and had a meagre vote share of 1.1 per cent.
Congress leaders in Himachal Pradesh credited its general secretary Priyanka Gandhi for its win which came as a boost for the grand old party.
Chief Minister Jai Ram Thakur, who won for the sixth time from Seraj assembly seat in Mandi district, said he respects the mandate of the people and submitted his resignation to Governor Rajendra Vishwanath Arlekar.
Anti-incumbency against the BJP government and the issue of price rise coupled with the Congress promising restoration of the old pension scheme and providing Rs 1,500 to every adult woman in the state seemed to be the main factors that worked in favour of the Congress.
With the BJP slogan of ‘Raj nahin, riwaaj badlenge’ (changing tradition and not the government) being rejected by voters, Congress leader Rahul Gandhi thanked the people for the “decisive win” and assured them that every promise made by the party will be fulfilled.
All India Congress Committee (AICC) in charge of Himachal Pradesh Rajeev Shukla hailed Priyanka Gandhi’s campaign and leadership, lauding the “hard work” put in by her.
Senior Congress leader Anand Sharma said the Congress victory will have resonance and ripple effect in the poll-bound states next year.