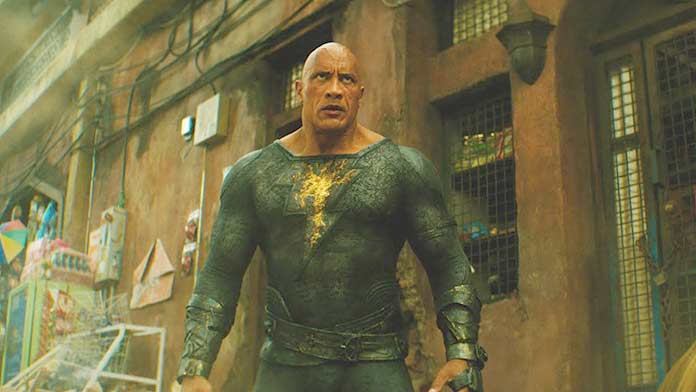 While North America carves up their pumpkins for Halloween, Dwayne Johnson is still carving up the box office.
Warner Bros.’ “Black Adam” is expected to repeat in the No. 1 spot over a quiet Halloween weekend, beating out Lionsgate’s seasonal horror release “Prey for the Devil.”
The DC Comics entry earned $7.5 million on Friday, marking a 72% fall from its opening day last week. Some rivals expect the Warner Bros. release to earn $24 million in its sophomore weekend.
That figure would mark a substantial 63% drop from last week’s opening of $67 million. Even for a superhero film — a genre that tends to yield front-loaded box office performances — that’s on the heftier side. It’s a good bit steeper than the second weekend tumbles of recent comic book films like “The Batman” (-50%) and “Eternals” (-62%). Marvel’s “Doctor Strange in the Multiverse of Madness” and “Thor: Love and Thunder” held less strongly (both -67%), but those films landed robust openings above $100 million.
These things are relative, of course. “Black Adam” is the most popular film of the fall moviegoing season. The DC entry should have no trouble pushing its domestic gross past $100 million this weekend, becoming only the 15th release this year to reach that milestone.
But with a reported production budget of $195 million along with marketing and distribution costs, it’s not hard to imagine that Warner Bros. was hoping for a bigger hit, especially considering the franchise repercussions of the film’s much-hyped post-credits scene. “Black Adam” will get one more weekend as the dominant force at the box office before Marvel’s “Black Panther: Wakanda Forever” hits theaters on Nov. 11.
“Prey for the Devil” looks to open in third place after earning $2.83 million from 2,980 locations on Friday. Rated PG-13, the horror film from Lionsgate and Confluence hopes to reach teenage audiences over the Halloween weekend. It’s been a strong month for horror, with “Smile,” “Halloween Ends” and “Terrifier 2” all becoming box office success stories. Lionsgate is trying to get “Prey” in on the action before spooky season comes to a close.
“Prey for the Devil” follows a nun training to become the first woman exorcist following her mother’s own possession. The film stars Jacqueline Byers, Posy Taylor, Colin Salmon, Christian Navarro, Lisa Palfrey, Nicholas Ralph, Ben Cross and Virginia Madsen.
“Prey for the Devil” didn’t log many reviews from critics, though the handful that came in were largely negative. In Variety’s review, critic Dennis Harvey was amicable, writing that “even if it falls short of being particularly memorable or scary, this is a decently entertaining possession potboiler.” Audiences don’t seem to be too hot on the film either, landing on a middling “C+” grade through research firm CinemaScore.
Universal’s “Ticket to Paradise” continues to win over audiences, landing a second place finish. The Julia Roberts-George Clooney two-hander is projecting a strong hold, falling only 37% for a $10.3 million gross.
(Variety)