Bodies burnt in children’s park in Lucknow; Officials look away 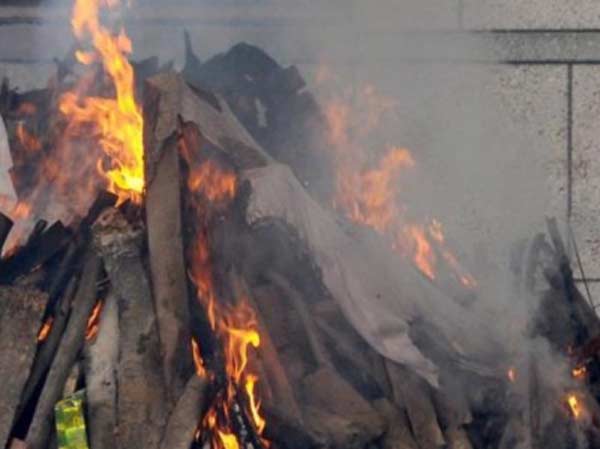 A children’s park in Jankipuram residential area here is being used as a cremation ground.

Residents said that people from the nearby Paharpur area frequently burn bodies here.

They have warned civic authorities of a protest, if a solution to the issue was not found within a week.

The residents said that they were allotted houses under a scheme 20 years back and 10 per cent extra money was taken to allot a park land.

However, the Lucknow Development Authorities said the map of the area already had a demarcation of both the park and a crematorium. Those who use this site as a cremation ground claimed that they have been using the area since long.

At present, Lucknow has three cremation sites, including Gulala Ghat, Baikunth Dham (Bhainsa Kund) and the Alambagh Nahariya ground, which are maintained by the Lucknow Municipal Corporation (LMC).

In 2022, a resident Brijesh Gupta filed a public interest litigation (PIL), seeking relocation of the ‘crematorium’ in Jankipuram.

The Lucknow bench of the Allahabad high court, in its order dated January 31, 2022, the Lucknow Development Authority (LDA) and other authorities to consider relocation of the ‘cremation site’ to an appropriate place.

Vivek Sharma, vice-president, Jan Kalyan Mahasamitim said, “It is sheer ignorance of LDA towards the poor. Even after the court’s order to relocate the ‘cremation site’, no viable solution has been found.”

Locals said that shrouds, bamboo caskets, urns, flowers and ashes keep lying in the park area for days after the funerals. This park is surrounded by approximately 50 houses inhabited by nearly 300 people, with houses at a nine-metre distance from the site.

The LDA’s layout plan (2004), has clearly earmarked the 20,000 square feet land into three parts with a cremation site in the middle and a park on two sides.

However, as of now, there is no such boundary dividing the land. In fact, the peripheral boundaries were found broken from all sides.

Though the plots in Jankipuram were allotted in 2002, the blueprint was created in 2004, which is why people were unaware of the cremation site’s existence beforehand.

Anurag Tiwari, a resident, said, “Bodies are burnt here every now and then despite there being another ground barely 1-2 kms away near Mirzapur village. When we protest, they threaten us with dire consequences. Smoke from the pyre gets directly into our houses.”

He said, “My wife, along with children, has shifted to her mother’s house. They are scared of living here. Despite having my own home, I am planning to rent a house in another area but no one is willing to take up my house on rent here.”

Dr Manish Srivastava, a psychologist said, “Witnessing cremations on a regular basis could be disturbing. This may result in severe mental health disorders.”

LDA secretary Pawan Gangawar said, “We cannot come to a decision until an amicable solution is found. Colony residents have their own problems and the people from Paharpur who perform last rites have their own view. I cannot assure when this problem will be resolved.”