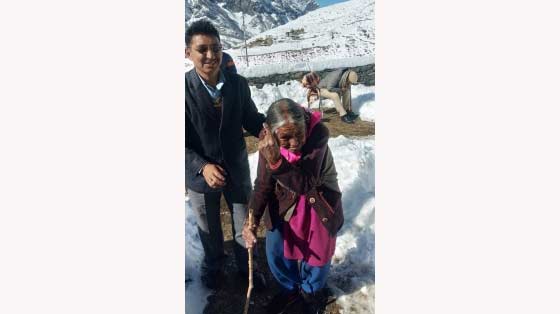 Braving extreme cold climatic conditions, electorates in Himachal Pradesh’s highest polling station in Chask Bhatori village in Chamba district, located at an altitude of 4,500 metres, were gung-ho over participation in record on Saturday despite trudging snow-marooned paths to exercise their franchise in a nearby polling station.

The village is located in Bharmour Assembly, where even the polling party has to trek 14-km arduous journey to reach the polling booth, chief electoral officer Maneesh Garg said.

At thepolling booth, 26 people are eligible to cast their votes situated in Sechu panchayat of the Pangi tribal area.

The Election Department has set up 7,881 polling stations for the polls to 68-member Assembly.

There are 7,235 polling stations in rural areas and 646 in urban areas, an official statement said.

Garg said voters across the state, including in remote Lahaul-Spiti, Kinnaur and Chamba districts, were excited to participate in the “festival of democracy”.

Officials told IANS that at a majority of 92 polling stations for a population of 31,538 in Lahaul-Spiti district there was widespread snowfall this week.

The polling booths in the district, a cold desert dotted by tiny helmets spread over the Himalayan peaks, adjoining Tibet, are scattered over rugged and inhospitable terrain where poll officials have to trek hours to reach there.

The Ka polling booth in Kinnaur district has the lowest number of voters in the state.

“The Ka polling station has only six voters — the lowest in the state. The highest number of voters (1,511) is at Sidhbari polling station in the Dharamsala assembly constituency,” he said.

Situated at 15,226 feet, Tashigang is the world’s highest polling station in Lahaul-Spiti district. The 2021 Mandi parliamentary by-polls recorded 100 per cent polling in Tashigang. There are a total of 47 voters.

Chask Bhatori, Ka and Tashigang polling stations are part of the sprawling Mandi parliamentary constituency that covers almost two-thirds of the hill state.

In the 2017 Assembly polls, a record 75.57 per cent polling, highest in four decades, was experienced. At that time too, the Congress and the BJP were locked in a straight contest.

Electorates of remote Kinnaur, Chamba and Lahaul-Spiti districts, part of the sprawling Mandi parliamentary constituency that covers almost two-thirds of the state, have a special place in the history of democracy in independent India as they were the first to exercise their franchise months ahead of the rest of the nation for the first general elections between December 1951 and February 1952.

This was done to ensure that snowfall did not deprive the tribals of the privilege of exercising their franchise.

The main contest is between the BJP and Congress.

The counting of votes will be held on December 8.