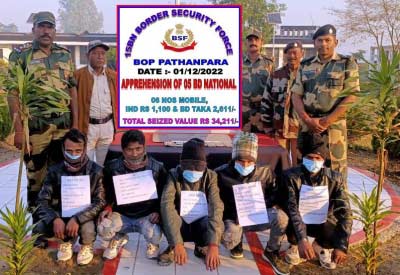 According to the BSF, materials including Bangladesh currency notes and six mobile phones were recovered from them.

The operation was carried out by the 15th Battalion of BSF.

All the arrested persons are being interrogated to ascertain their intentions behind infiltrating.

Illegal immigration and infiltration has been a major problem along the India-Bangladesh border.

Recently, BSF Director General Pankaj Kumar Singh had termed infiltration as a big challenge and talked about measures being taken to prevent it.