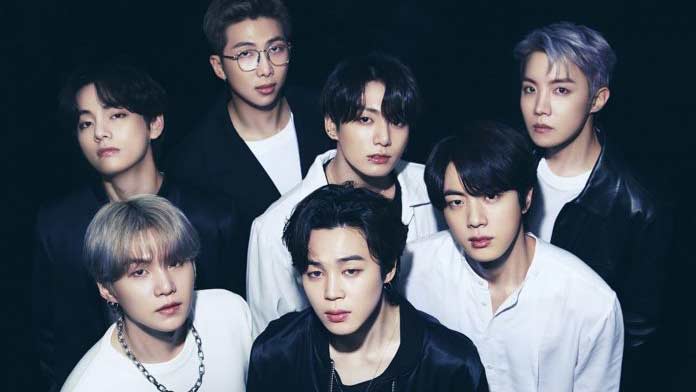 BTS have achieved the most Number One hits on the Billboard Hot 100 this decade. Billboard took to its official Twitter on November 1 to publish a list of artists who have achieved the most Number One hits on the Hot 100 chart in the past decade. The K-pop boyband are ranked in the first place with a total of six chart-topping hits.
Meanwhile, other artists named by Billboard to have bagged the most Hot 100 Number Ones include Drake with five hits, Ariana Grande and Taylor Swift with four each, as well as Justin Bieber and Nicki Minaj with three Number Ones each.
According to Billboard’s record of BTS’ chart history, BTS first topped the Hot 100 in 2020 with their collaboration with Jason Derulo on a remix of ‘Savage Love’ for a week, before they topped the chart again twice more that year with the songs ‘Dynamite’ and ‘Life Goes On’. ‘Dynamite’ retained its spot on the Number One spot for three weeks, while ‘Life Goes On’ held the spot for one.
The three remaining Hot 100 Number One hits were achieved in 2021: ‘Butter’ held its position atop the chart for 10 weeks, while ‘Permission To Dance’ and their Coldplay collaborative single ‘My Universe’ were Number One for a week each.
The new Billboard feat achieved by BTS comes hot on the heels of member Jin’s recent solo debut with the single ‘The Astronaut’, co-written by both himself and Coldplay, marking the second time both acts have joined forces. Shortly after the song was released, the Korean idol joined the British band at their concert in Buenos Aires last week (October 28), marking the song’s debut live performance.
Following the conclusion of ‘The Astronaut”s promotional activities, Jin will become the first BTS member to enlist for mandatory South Korean military service for approximately two years, as announced by Big Hit Music on October 17. The label also mentioned plans for the seven-piece to reconvene in 2025, once all the members have fulfilled their duties.