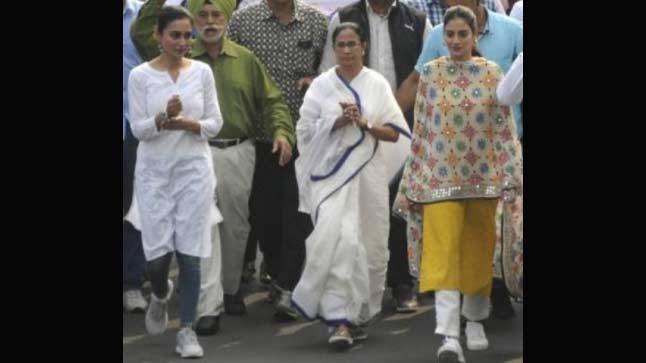 Three-time Trinamool Congress MLA and the West Bengal minister of state for consumers affairs department, Srikant Mahata has been censured and issued a show- cause by his party after a video went viral where he was seen questioning the credibility and morality of the celebrity leaders in the party.

In light of the show-cause notice, the minister has reportedly withdrawn his statement and also apologised for the same.

“Leaders like Mimi Chakraborty, Nusrat Jahan, June Malia and Saayoni Ghosh are looting money. But they are being considered assets for the party. I had been trying to bring this notice to our senior leaders like Abhishek Banerjee and Subrata Bakshi. But they refused to acknowledge that,” Mahata was heard saying in the viral video. All are popular faces of the Bengali silver screen and television serial circuits.

While Mimi Chakraborty and Nusrat Jahan are Trinamool Congress Lok Sabha members from Jadavpur and Basirhat constituencies respectively, Malia is an elected MLA from Midnapore Assembly constituency. On the other hand, Saayoni Ghosh is the state president of Trinamool Congress’s youth wing in West Bengal.

After the video went viral, the leaders that he named brought that to the notice of the party leadership, which immediately censured him and also issued a show- cause notice.

Ultimately, Mahata backtracked and withdrew his statement, as claimed by Trinamool Congress’s West Midnapore district coordinator, Ajit Maiti. “Mahata has withdrawn his statement and also apologised for the same. He has explained that he made such statements being driven by emotions,” Maiti.

However, Mahata’s apologies have not minimised the anger of the celebrity leaders that he named. According to Malia, Mahata would have been careful about the comment that he makes, since he is not just an elected legislator but also a minister. “I am happy that the party leadership has censured him and I hope that in future he will refrain from making such comments,’ she said.

Jahan ignored Mahata’s statements and claimed that it is up to the people of the state to decide who is an asset and who is not. “We are here in politics to serve the people only. My motto is to work more and speak less,” she said.

This is not the first time that elected representatives of Trinamool Congress from the celebrity world have faced criticisms. Previously, questions have been raised about the pathetic performance of the celebrity MPs and MLAs as regards to participation in the Parliamentary and assembly debates. Now, those criticisms have started coming from within the party.