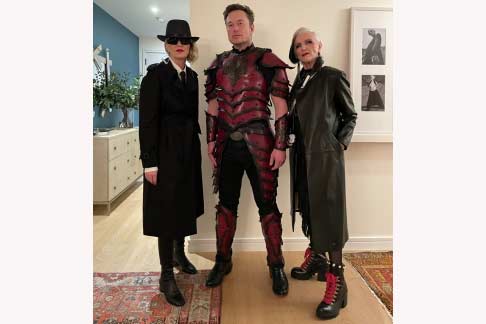 Elon Musk on Tuesday changed his profile to ‘Twitter Complaint Hotline Operator’ from being a Chief Twit, as he celebrated Halloween festival with his mother.

Bombarded with requests to change Twitter, Musk decided to change his profile for 112.7 million followers.

Famous American author Stephen King asked him that $20 to get the Twitter blue badge is too much.

Musk replied: “We need to pay the bills somehow! Twitter cannot rely entirely on advertisers. How about $8?”

The new Twitter CEO further said that he will explain the rationale in longer form before this is implemented.

“It is the only way to defeat the bots and trolls,” he mentioned.

Musk also told his followers to follow Yoel Roth, who is Head of Safety and Integrity at the micro-blogging platform, “for the most accurate understanding of what’s happening with trust and safety at Twitter”.

He also told a follower that Twitter will soon purge all inactive accounts, possibly if they are inactive for more than a year.

On dissolving the Twitter board, Musk said: “This is just temporary.”

Musk is now officially the new CEO of Twitter as the micro-blogging platform braces for deeper layoffs.

He has reportedly brought more than 50 employees from Tesla into Twitter to help with the transition.