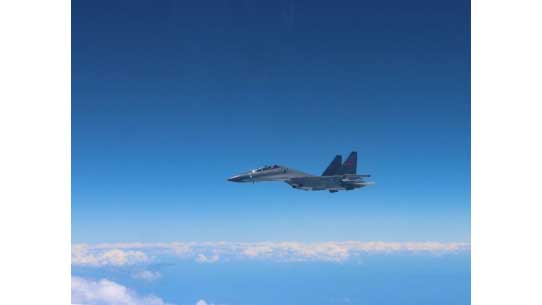 China’s People’s Liberation Army on Monday continued their large-scale sea and air drills around Taiwan despite its initial announcement that the exercises which began last week in response to US House Nancy Pelosi’s visit to Taipei, would end on Sunday.

In announcing the manoeuvres to the north, south-west and east of self-ruled island on August 2, China had originally promised their conclusion on Sunday.

No new formal end date has been announced.

In fact, some commentators on Chinese media expressed the view that the military exercises could become the new normal.

Defence Ministry spokesman Wu Qian on Monday said the drills are a “necessary warning” to the US and Taiwan, describing them as an “entirely reasonable and appropriate” response to their recent “provocations”.

He said the tensions were “deliberately” stoked by Washington, with Pelosi travelling to Taipei last week in the face of fierce opposition from Beijing.

The Chinese leadership rejects official contacts by other countries with Taipei because it regards the island as part of the mainland.

Taiwan, on the other hand, has long seen itself as independent.

Over the past several days the Chinese military practised not only a naval and air blockade, but also amphibious landing capabilities to launch beach assaults on Taiwan, according to Chinese media.

Taiwan’s military said Chinese aircraft flew 66 sorties on Sunday alone. In the process, 22 jets crossed the Taiwan Strait median line, a demarcation that had mostly been respected in the past.

Fourteen Chinese warships were said to have participated, as well.

A Chinese drone was also spotted again on Sunday evening over the outlying Taiwanese island of Kinmen, which is only a few kilometres from the Chinese coast, the Defence Ministry in Taipei reported.

Until recent days, there had been no Chinese overflight of the island since the 1950s.

Other Chinese manoeuvres are also planned this week in other waters, including in the north in the Bohai Gulf and Yellow Sea, and in the south in the South China Sea off the coast of Guangdong province.

Violence in Sikkim amid SDF’s bandh over ‘immigrant’ row