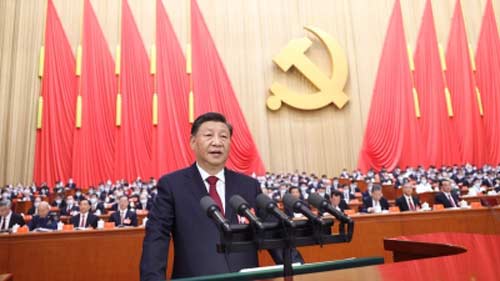 China’s President Xi Jinping has strengthened his power as leader and elevated his status within the Chinese Communist Party’s (CCP) history, with major political resolutions announced on the final day of a key political meeting.

On Saturday, the CCP congress approved amendments to its constitution, including the so-called “Two Establishes” and “Two Safeguards”, aimed at enshrining Xi as being at the core of the party and his political thought as its underpinning ideology, the Guardian reported.

A list of reappointed delegates also confirmed premier Li Keqiang would be retiring from politics, as well as several other senior party figures.

The President began his closing speech around midday, as party officials announced the confirmation of the amendments, which all but confirmed that the President will remain in power for another term.

Xi, 69, is widely expected to be reaffirmed this weekend as the party’s general secretary, paving the way for him to gain a norm-breaking third term as Chinese president.

“Dare to struggle, dare to win, bury your heads and work hard. Be determined to keep forging ahead,” he told those gathered.

The week-long conclave sees thousands of CCP delegates, ostensibly representing the hundreds of millions of party members, meet in Beijing, the Guardian reported.

The purpose is largely to rubber-stamp reshuffles of senior party positions and constitutional changes likely decided on long before the meeting began. The meeting is highly choreographed and mostly behind closed doors.

However, shortly before Xi’s speech began, former leader Hu Jintao was escorted out of the room, without explanation.

Since coming to power in 2012, Xi has further consolidated his individual power, including spearheading the elimination of term limits in 2018.

Prior to those changes, he would have been stepping down as leader this week, but instead has the potential to be leader for life, the Guardian reported.

Analysts are watching this weekend’s events keenly, to see if Xi is also formally given the title of “People’s Leader”, an honorific not officially used since Mao Zedong.

There has also been speculation that the role of party “chairman” could be reinstated.

GST mop up grows 11% in November