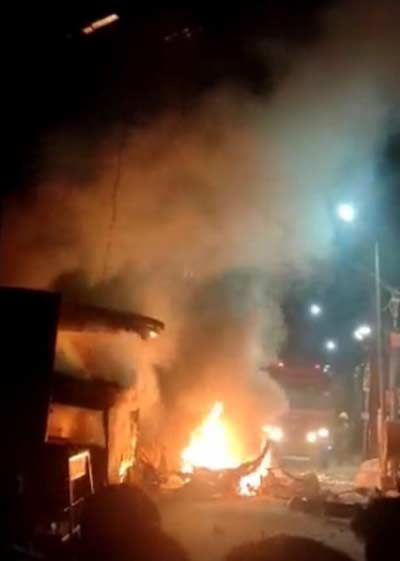 The Tamil Nadu Police have arrested five people in the Coimbatore car blast case in which one person was killed, said officials here on Tuesday, adding that the case is likely to be taken over by National Investigation Agency (NIA).

An explosion happened at 4 a.m. on Sunday near the famous Eeswaran temple at Ukkadam. The body of a 25-year-old youth Jameesha Mubin was recovered from the blast site.

Ukkadam is a highly sensitive area of Coimbatore and was the centre of action in the 1996 Coimbatore blasts leading to the death of 56 people and injuring more than 200.

Mohammed Talka, who has been arrested in the case, is the son of Navas Khan, who is the brother of the main accused in the Coimbatore blasts. Police said that after the recovery of nails and marbles from the accident site, it was suspected that the deceased was planning to make a low intensity device. The raids at the residence of the deceased found potassium nitrate and sulphur and this led to further investigation and probe on the involvement of other people in the conspiracy. After questioning, the police have arrested five men.

Tamil Nadu Police officers told IANS that the probe was likely to be taken over by the National Investigation Agency (NIA).

Opposition parties, AIADMK and BJP, have come out strongly against the failure of the state police. The AIADMK interim general secretary and former Chief Minister Edappadi K. Palaniswami told the mediapersons that whenever the DMK assumes power in the state such things happen, and charged that the law and order situation in the state has hit a new low .

BJP leader and state president K.Annamalai has come out strongly against the DMK government and state police and demanded an NIA probe.