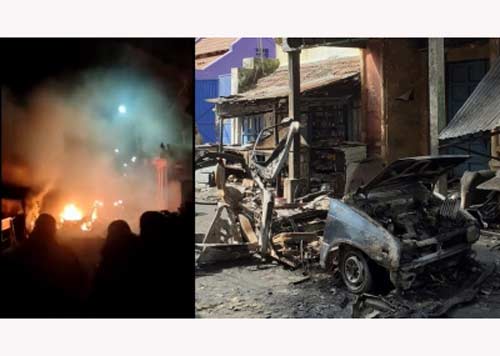 The National Investigation Agency (NIA), which has commenced the preliminary investigation into the car blast in Tamil Nadu’s Coimbatore, suspects a planning of a terror strike similar to Sri Lanka’s Easter bombings in South India.

The Tamil Nadu Police officers, who have conducted a detailed probe, has also found that Jashmee Mubin had tried to establish contacts with some terror elements, including the main conspirator behind the Easter Day bombing in Sri Lanka. Jashmee Mubin was killed in the car blast that happened on October 23.

However, sources in Tamil Nadu Police told IANS that this conspiracy angle was not confirmed. The sources said that the presence of Al Uma founder S.A. Bashas’ brother Navas Khan’s son, Mohamed Talik, has given a clear indication that a major conspiracy angle was behind the car blast. The police are investigating whether the car blast was a direct suicide attack or whether the gas cylinder explosion was accidental.

An explosion happened at 4 a.m. on Sunday near the famous Eeswaran temple at Ukkadam. The body of a 25-year-old Jameesha Mubin was recovered from the blast site.

Ukkadam is a highly sensitive area of Coimbatore and was the centre of action in the 1996 Coimbatore blasts leading to the death of 56 people and injuring more than 200.