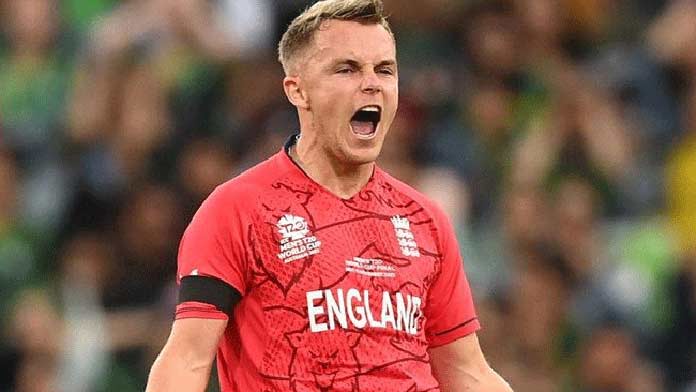 England all-rounder Sam Curran on Friday became the most expensive player in the history of IPL auctions after fetching a whopping Rs 18.5 crore bid from Punjab Kings here.
An intense bidding followed for Curran with Mumbai Indians, Royal Challengers Bangalore, Rajasthan Royals, Chennai Super Kings, Lucknow Super Giants and Punjab Kings raising their paddles frenetically to secure the services of T20 World Cup player-of-the tournament.
In the end, it was Punkab Kings that broke the bank to get Curran, who drew highest-ever bid that bettered the previous best buy of Rs 16.25 crore that Rajasthan Royals had shelled out to grab South African all-rounder Chris Morris in 2021. Australia all-rounder Cameroon Green was second-highest earner, fetching Rs 17.5 crore bid from Mumbai Indians.
England Test skipper Ben Stokes was the third-highest gainer, fetching Rs 16.25 crore from CSK who pipped Kolkata Knight Riders in another intense bidding war. England players were in demand as batter Harry Brook earned a Rs 13.25 crore winning from Sunrisers Hyderabad.
Brook, who struck three hundreds in as many games and set new record for most runs by an England batter in a Test series in Pakistan, started at a base price of Rs 1.5 crore.
The bidding for Brook was mainly between SRH and Rajasthan Royals.
India international Mayank Agarwal was also bought by Sunrisers Hyderabad for Rs 8.25 crore. His base price was set at Rs 1 crore. New Zealand stalwart Kane Williamson was sold at his base price at Rs 2 crore to Gujarat Titans. Out-of-favour India batter Ajinkya Rahane was sold at his base price of Rs 50 lakh to Chennai Supper Kings, the only bidder for the player.
South Africa batter Rilee Rossouw and Bangladesh al-rounder Shakib-Al-Hasan went unsold. West Indies all-rounder Jason Holder was sold to Rajasthan Royals for Rs 5.75 crore.