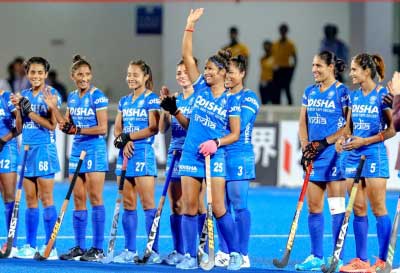 For fans of women’s hockey in India, the most abiding memory related of the Commonwealth Games in of the historic gold medal that India won in Manchester in 2002.

With the 2022 Commonwealth Games in Birmingham just around the corner, some former and current players of the Indian women’s hockey team went down memory lane to share their most cherished moments from the past editions of the prestigious tournament.

“The way we fought back in the crossover match against South Africa boosted our morale. From 0-3 down in the first half to win the match 4-3 in the extra time, set the tone for us. We then beat New Zealand 2-1 in the semi-final and went on to win against the hosts England 3-2 in the extra time. But it was an outcome of the hard work done in the past eight-nine months and the team unity was our biggest strength,” Helen Mary was quoted as saying by Hockey India in a release on Thursday.

Asunta Lakra, former captain of the women’s hockey team, recalled her favourite moment from the 2006 Melbourne Commonwealth Games, where India clinched silver after losing 0-1 to the hosts Australia in the final.

“It was my first major tournament with the senior team and I scored my first goal in the opening game itself against Australia, so it is my favourite memory of the Commonwealth Games. We missed the gold medal with a very narrow margin, but it was a great experience overall. We finished second in the pool stage and then defeated New Zealand 1-0 in the semi-final to ensure the Indian women’s hockey team’s second consecutive medal at the Commonwealth Games,” said Asunta.

Navjot, who featured in the 2014 and 2018 editions, said, “This will be my third Commonwealth Games, and it’s always an honour to represent India at the prestigious tournament. The win against England in the Pool stage in the last edition is one of my best memories of the tournament. We missed out on winning a medal, but we will give our best to create history in Birmingham.”

Navneet too stated that the win against England in the pool stage match has been her most memorable moment of the quadrennial games so far.

“I scored a goal in that match, and it is always a special feeling to contribute to the team’s win. It was also my career’s first Commonwealth Games. I still remember every moment of it,” she said.

The Indian team is currently at a final preparatory camp in Nottingham. It will leave for Birmingham on July 23 for the marquee event scheduled to begin on July 28.

The Indian team, captained by Savita, will square off against Ghana in the opening match on July 29, before playing Wales on July 30, England on August 2 and Canada on August 3 in the pool stage.