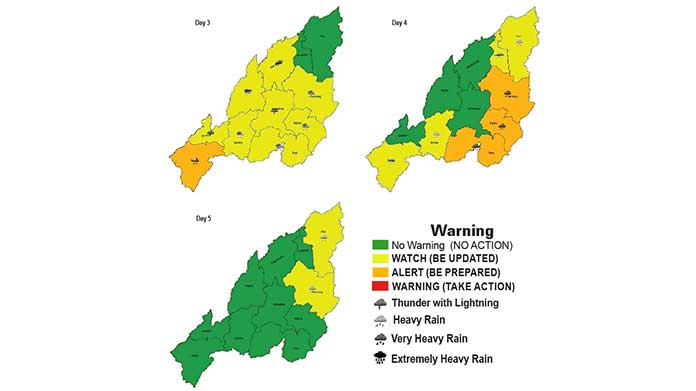 A low-pressure system over the Andaman Sea that is expected to intensify into a cyclonic storm is likely to bring rain to North East region. The cyclone in the Bay of Bengal, to be named ‘Sitrang’ when it forms, may intensify into a severe cyclone October 25 2022, according to the latest national cyclone bulletin released by the IMD.
In its daily bulletin, the India Meteorological Department (IMD) said that well marked low pressure area concentrated into a depression over southeast adjoining eastcentral Bay of Bengal was very likely to intensify further into a deep depression over eastcentral and adjoining southeast Bay of Bengal by October 23 morning.
Subsequently, it is very likely to recurve gradually northnortheastwards and intensify into a Cyclonic Storm over central Bay of Bengal by October 24 morning, IMD stated.
Under the impact of the system, IMD said fairly widespread/Widespread light/moderate rainfall with isolated heavy falls and thunderstorm/lightning was very likely over Assam & Meghalaya and Nagaland, Manipur, Mizoram & Tripura during 24-26 and Arunachal Pradesh on October 25, 2022.
IMD also stated that isolated very heavy rainfall was also very likely over Assam & Meghalaya and Nagaland, Manipur, Mizoram & Tripura on October 25 & 26, 2022.
Meanwhile, Regional Met Centre (RMC) Guwahati on Saturday issued ‘Orange’ alert for Peren district on October 24- 25 with very heavy rainfall likely and also for Phek, Kiphire and Tuensang districts on October 25-26.
On Friday, Union Cabinet Secretary Rajiv Gauba also reviewed the preparedness of Central ministries, agencies and state governments to deal with the situation arising out of Cyclone Sitrang developing in the Bay of Bengal during the National Crisis Management Committee (NCMC) meeting.
Reviewing the preparedness measures of the states and Central agencies, Gauba stressed that all preventive and precautionary measures should be taken by the concerned authorities of the state governments and concerned agencies of the Centre, before the cyclonic storm makes landfall, as the aim should be to keep the loss of lives to near zero and minimize damage to property and infrastructure.