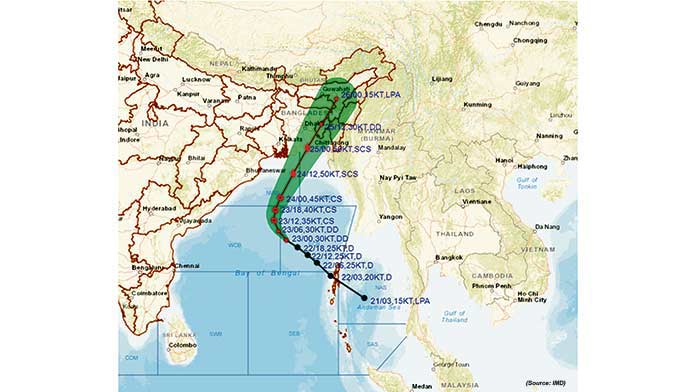 A “red alert” has been issued for Tripura, Assam, Mizoram, Manipur and Nagaland. An “orange alert” has been issued for Arunachal Pradesh and West Bengal as a deep depression over Bay of Bengal has intensified into a cyclonic storm “Sitrang”, a weather report stated on Sunday.
The cyclone, named Sitrang by Thailand, will reach the West Bengal-Bangladesh coast on Tuesday, IMD said. Indian Meteorological Department said the North East region is likely to be affected with heavy to extremely heavy rainfall, with wind speeds up to 60 kmph on Monday.
NSDMA issues update: Meanwhile, Nagaland State Disaster Management Authority (NSDMA), Home department on Sunday, has issued weather updates for the coming days.
NSDMA joint chief executive officer Johnny Ruangmei said Nagaland will experience heavy to extremely heavy rainfalls at most places and thundershowers will be a common feature for next few days. However, districts such as Peren, Phek, Wohka, Kiphire and Tuensang were likely to experience very heavy rainfall at isolated places.
NSDMA appealed to all to take necessary precautionary measures during this time and exercise caution from gale winds which may cause disruption in communication and connectivity. During this time, the minimum and maximum temperature of the state will also vary between 9°C and 30°C respectively, it said.
NSDMA has appealed to the public to exercise caution to avoid any eventualities during this period. It also requested all DDMAs and other line departments, responsible to attend to any emergencies caused by natural calamities, to be on alert to save lives and properties during this period.
NSDMA said the deep depression, which has moved north-westwards with a speed of 18 kmph, and lay centred at 11:30 hours IST on October 23, is very likely to move north-westwards and intensify into a cyclonic storm over central Bay of Bengal. Thereafter, it would recurve and move north north-eastwards and cross Bangladesh coast between Tinkona Island and Sandwip close to Barisal around October 25 early morning.
Under its influence fairly widespread/ widespread rainfall accompanied with thunderstorm/lightning/heavy to very heavy rainfall is very likely to occur at isolated places over the North Eastern states during October 24-26.