Day-two of Sesquicentennial celebration at Molungyimsen 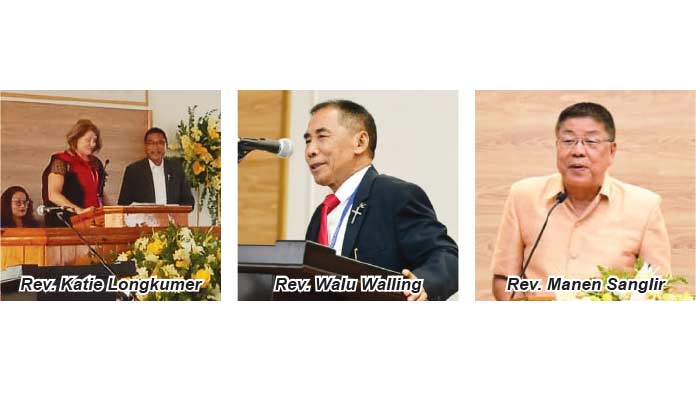 On the second day of the sesquicentennial celebrations at Molungyimsen Baptist Arogo, various speakers exhorted the gathering of around 1500 people. The sesquicentennial celebration will conclude on November 6.
Addressing the congregation, regional consultant for economic development and community transformation India, Nepal and Sri Lanka, Rev. Katie Longkumer reminded the legacy of deep-rooted Christianity planted by Dr. E.W. Clark. She said that the legacy should be carried on and spread across the land and reach out to the unreached. Rev. Katie also called upon the present generation to not compromise but pave the way for further extension of the teaching of God’s glory.
In his message, Er I. Pangjung Longkumer expressed gratitude to the American missionaries for planting the “fruitful seeds for Naga people”, particularly the Ao people who were the first to receive the word of God. Even though the situation then was not conducive for Christian missionaries to reach out to the Nagas, Er Pangjung, however, said it was through Dr Edward Winter Clark’s sacrifice and dedication that Nagas could receive the Gospel.
He also lauded the forefathers, who selflessly contributed in spreading Christianity in Ao region. As a mark of respect and acknowledgement to all who had sacrificed in spreading the gospel, a one-minute silent prayer was observed.
In his greetings, Tamlu Baptist Church pastor Rev. Paushing Phom thanked all the delegates, participants and the people of Molungyimsen, particularly Dr. EW Clark for bringing the gospel to Phom region in 1881. He also mentioned that late pastor Tsuknungmeren besides spreading the gospel to the people of Tamlu area for more than a decade also brought education to the people of the area.
Senior citizen of Merangkong village and member special committee ABAM 1986, Jangkidong Longkumer stressed that the real meaning of Jubilee was to make peace with the enemies. He stated that knowing God’s glory was something to be accepted, interesting and to be cherished. With the ongoing celebration, he urged the people to change for better and progress in spheres of life.
Others who addressed the congregation included– former ABAM literature secretary Rev. Walu Walling and director ‘The Great Commission, Thailand’ Rev. Maken Sanglir and joint secretary department of co-operation, Kusa Fithu.
Earlier special songs were presented by Tuli Molungyimsen Fellowship and Mokokchung Molungyimsen Fellowship, followed by Sesquicentennial feast and live music by Samaro and various artistes.