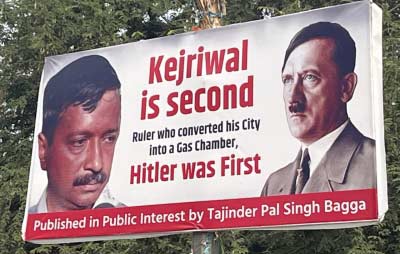 The poster outside the BJP office in the national capital, says: “Kejriwal is second… Ruler who converted his city into a gas chamber… Hitler was first…”

Speaking to IANS, Bagga said: “Delhi has become a gas chamber and this not my or the BJP’s version, this is what the Supreme court has said. Delhi is choking and the Chief Minister is on an election tour. Hilter was the first one who made gas chambers, similarly Kejriwal has left the people of Delhi to suffer from the poisonous air.”

The party spokesman further said that Kejriwal also failed to implement a bio-decomposer in Punjab which the latter claimed would convert all stubble into fertiliser in 15 days.

Attacking the AAP-led government in the national capital, Bagga said: “People are dying in Delhi and its Chief Minister is not in Delhi. Stubbles are being burnt in Punjab but the Chief Minisyet is not in his state. Instead they taking election tours in Himachal and Gujarat. All they are interested in politics and nothing else.”

Regarding the upcoming MCD polls, the spokesman said: “Kejriwal is questioning the BJP for doing nothing in the MCD, but I want to ask then what they have done in Delhi in the last seven years? Let Kejriwal say whatever he wants but we know we have done for Delhi… The people are with us and we will win again.”

SourceIANS
Previous article
If I am country’s biggest ‘thug’, why did you accept Rs 50 cr from me? Conman Sukesh tears into Kejriwal
Next article
Set ‘naya rivaj’ to re-elect BJP govt in Himachal: Modi
Share
Facebook
Twitter
WhatsApp
Linkedin
Telegram
Must Read

Rani Gaidinliu statue installed in UP