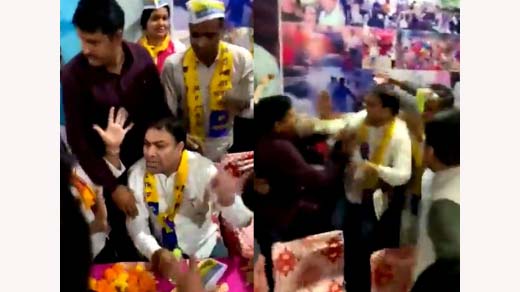 Delhi Police has initiated legal action against AAP workers after they thrashed party MLA from Matiala Gulab Singh Yadav during a meeting at Shyam Vihar in the national capital.

The altercation had taken place over distribution of civic polls tickets on Monday.

An information regarding manhandling of MLA Gulab Singh was received around 8 p.m. following which a police team rushed to the spot, a senior police official said on Tuesday.

“There was an altercation over the issue of ticket distribution which resulted in alleged manhandling of Yadav by some party workers. He has been medically examined and no external injury found. Legal action being taken as per the statement,” said the official.

A video of the incident was doing the rounds on social media. In the video, the AAP workers are seen grabbing Yadav by collar and hitting him.

Yadav was finally seen running to save himself from the wrath of the angry workers of his own party.