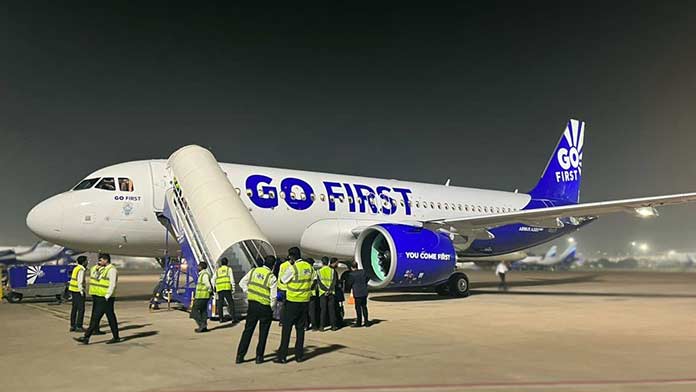 AIRLINE APOLOGISES FOR LEAVING BEHIND 55 PASSENGERS

Aviation regulator DGCA on Tuesday issued a show cause notice to Go First for “multiple mistakes” that led to 55 Delhi flight passengers being left behind in a coach at Bangalore airport on Monday and the budget airline has apologised for the incident, saying it happened due to inadvertent oversight in reconciliation.
The airline has been given two weeks time to respond to the show cause notice and based on the response, further action will be initiated. Go First has derostered the staff involved in the incident pending an inquiry. The airline has issued a show cause notice to the ground handling agency concerned at the Bangalore airport for the lapse.
The incident happened on Monday morning with the passengers who were to board a Delhi flight and later in the day, the Directorate Genral of Civil Aviation (DGCA) had sought a report from the airline about the incident. In a statement on Tuesday, the regulator said that Go First operated flight G8-116 on Bangalore-Delhi sector leaving behind 55 passengers in the passenger coach at Bangalore airport. After perusal of the incident report submitted by Go First on Tuesday, the watchdog said that prima-facie it emerges that the airline failed to comply with various norms.
“In the instant case, multiple mistakes such as lack of proper communication, co-ordination, reconciliation and confirmation have resulted in a highly avoidable situation,” DGCA said. It has issued a show cause notice to Accountable Manager/ Chief Operation Officer of Go First as to why enforcement action should not be taken against them for dereliction of their regulatory obligations.
“We sincerely apologise for the inconvenience caused to the passengers due to an inadvertent oversight in the reconciliation of flight G8 116… passengers were accommodated on alternate airlines to Delhi and onward to other destinations,” an airline spokesperson said in a statement on Tuesday.
Go First has decided to offer all affected passengers one free ticket for travel on any domestic sector in the next 12 months.
“The airline has initiated an inquiry into the incident and the matter is being investigated. All concerned staff off the roaster till the inquiry is going on,” it said, adding that the airline has also issued a show cause notice to the ground handling agency concerned.
The number of staff who have been derostered could not be immediately ascertained. In its statement, DGCA mentioned about norms pertaining to ‘Minimum Requirements for Grant of Air Operator Certificate to Operate Scheduled Air Transport Services (Passenger)’ and the Air Transport Circular on ‘Facilities/Courtesies to esteemed travelling public at airports’.
“As per above-referred regulations, the concerned airline is responsible to ensure adequate arrangement for ground handling, preparation of load and trim sheet, flight dispatch and passenger/cargo handling and also ensure that all the ground handling staff engaged in passenger handling undergo periodic soft skill training for sensitisation, courtesy, behaviour and procedures for assisting the passengers,” it said.
To follow the principles of natural justice, the regulator said two weeks time has been given to submit the response to the show cause notice and based on that further action will be taken.
On Monday, some passengers mentioned about the incident on social media and in response to a tweet by a passenger, the airline urged the users to share their details and said: “We regret the inconvenience caused”.
This is at least the third instance in less than a week where DGCA has issued a show cause notice to an airline. The regulator has issued show cause notices to Air India with respect to incidents of passenger misbehaviour onboard two international flights.