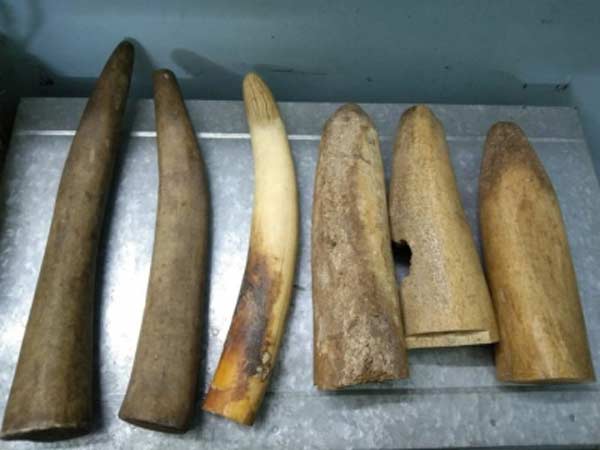 Three persons have been arrested in this connection.

The three arrested have been identified as Asit Oraon, Anil Oraon and Punilal Nagachia. While Asit and Anil are residents of Fulbari area, Punilal belongs to Garidhura.

Based on a tip-off that a group of wildlife smugglers were trying to smuggle an elephant calf in a mini-truck through the Khoribari forest area, a joint team of district police and SSB personnel launched a search operation.

Finally, the vehicle was apprehended at Ghoshpukur forest range in Khoribari area. However, instead of the calf, smuggled elephant tusks were recovered from their possession. The estimated market value of the item seized will be to the tune of Rs 1 crore,” a state police official said.

The three persons arrested were not able to furnish any document nor provide any information regarding the tusks. This made the sleuths believe that the items seized were meant for smuggling. The police are currently interrogating the three to track their other associates.

According to police, this particular belt in north Bengal has become a hotbed of wildlife smuggling. Just six days ago, a Trinamool Congress leader in adjacent Alipurduar district was arrested by sleuths of the state’s forest department while attempting to smuggle a pangolin.

The arrested person was identified as James Borogaon (53), who is the deputy chief of the Khoyardanga-2 village panchayat.

A pangolin was also recovered from his possession.

Tesla crash: Indian-American to be held in jail without bail