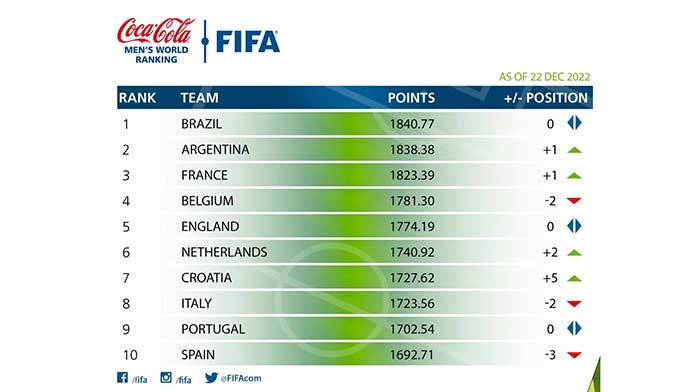 Winning the World Cup was not enough to lift Argentina atop the FIFA world rankings with Brazil keeping the No. 1 position on Thursday.
Brazil was eliminated in the quarterfinals by Croatia but built enough rankings points from results over recent years that feed into FIFA’s calculation.
Argentina moved up one place to No. 2 and beaten finalist France also rose one to No. 3.
Belgium is still at No. 4, a fall of two places, despite winning only one game in Qatar and failing to advance from the group stage. England and the Netherlands, both beaten quarterfinalists, stay at Nos. 5 and 6 respectively.
Croatia climbed five places to No. 7.
European champion Italy is at No. 8 despite failing to qualify for the World Cup. Morocco is the best-placed African nation at No. 11, up 11 places, for its historic run to the semifinals.
The United States at No. 13 is the best of the CONCACAF region teams, rising three places after advancing to the round of 16. Mexico is No. 15.
Japan leads the Asian confederation teams at No. 20, up four places, and Australia rises 11 places to No. 27. Both reached the round of 16.
Cameroon, which beat Brazil in the group stage, rose 10 places to be No. 33.
Qatar dropped 10 places to No. 60 after losing all three games as the home team at the World Cup.

India held on to its 106th position in the latest FIFA rankings released on Thursday (December 22). The Blue Tigers have been ranked 106th for quite sometime now. They also held that position when the rankings were last updated on October 6. India are also ranked 19th in Asia behind the likes of Vietnam, Bahrain and Jordan. Japan, who advanced to the last 16 stages of the FIFA World Cup 2022, lead the Asian Football Confederation (AFC) in terms of rankings. The Samurai Blue are ranked 20th in the world. They topped their group ahead of Spain and Germany during the World Cup group stages.
Japan are followed by fellow World Cup participants Iran, South Korea, Australia, Saudi Arabia and Qatar. Iran, who dropped four places, South Korea and Australia are the other three Asian teams inside the top 30.
The Blue Tigers were last in action in the month of September when they participated in two international friendlies in Vietnam. India faced Singapore and hosts Vietnam in the three-team friendly tournament. Igor Stimac’s boys played a 1-1 draw against Singapore in their opening match, before being thrashed 0-3 by Vietnam in the other friendly.
India are next expected to be in action in March during the first international window of the year. March 20-28 is the first international window of the year 2023. The Blue Tigers would want to play a couple of international friendlies as they prepare for the AFC Asian Cup 2023. The next edition of the AFC Asian Cup will take place in Qatar. Initially, the tournament was scheduled to take place in China, but Qatar won the hosting rights after China withdrew.

Hope fading as deaths in Turkey, Syria quake near 12k