FIFA WC: From Willie to La’eeb – the history of mascots 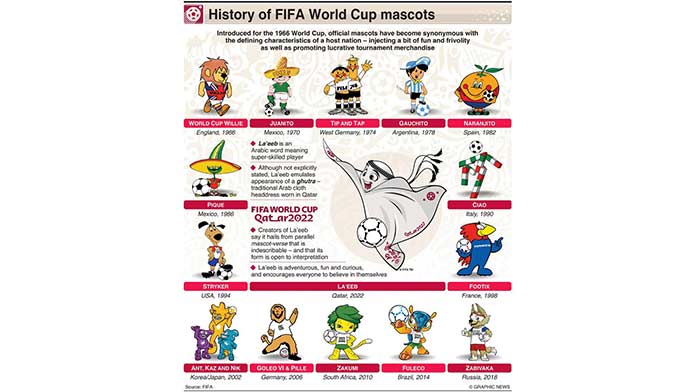 Although the World Cup began in 1930, it got its first mascot only for England 1966. Named ‘Willie’, the mascot was a Lion, a common English motif, wear-ing a Union Jack (English Flag) themed T-shirt. According to Sportstar, designed by freelance artist Reg Hoye WIllie, it still lives on as an iconic moment in the history of the World Cup and paved the way for mascots to become an integral part of the tournament. In Mexico 1970, ‘Juanito’, a Mexican boy with a sombrero in the host colours was the mascot. West Germany 1974 retained the same formula but had two kids – Tip and Tap – as its mascot.
While one kid had Weltmeisterschaft (German for World Cup) emblazoned on its shirt, the other had the number 74. The theme of a young boy as the mascot persisted into Argentina in 1974. Named Gauchito, he adorned a yellow kerchief and a whip, much like the skilled horsemen of the South American country.
Spain broke the trend and introduced a fruit as a mascot when it hosted the 1982 edition of the World Cup. Christened ‘Naranjito’ (Spanish for Orange), the mascot donned the Spanish jersey with a wide grin. Mexico in 1986 took it one step further by introducing a vegetable into the fray. This time the inspiration was Jalapeno Pepper, an integral part of Mexican cuisine. The mascot was named ‘Pique’, which is derived from Picante (Spanish for spicy). The Sombrero of ‘Juanito’ made a re-appearance with ‘Pique’.
USA 1994 returned to simpler roots for its mascot and chose a friendly dog as its totem. Titled ‘Striker’, the mascot wore the colours of the USA national team with a smile as wide as the coun-try.
The French chose to adopt one of its national symbols – the Cockrel – as the mascot for the 1998 World Cup. Mixing football and -ix (a common suffix of Gaul names), it was named ‘Footix’ and had ‘FRANCE 98’ written on its chest.
The first World Cup of this century, hosted by Japan and South Korea, was also the first to have three figures as mascots. Given the names of Ato, Kaz and Niks from public voting, the trio were computer-generated figures which displayed the arrival of the new age.
Germany 2006 saw the return of a lion figure as the World Cup mascot. Named ‘Goleo VI’ (an amalgamation of Goal and Leo), it had a sidekick called ‘Pille’, a talking football. Inspired by leopards, a common feature in South Africa, ‘Zakumi’ was the mascot for the 2010 World Cup. The ‘ZA’ in its name stood for South Africa, while ‘Kumi’ meant 10 in various Afri-can languages. Zakumi also sported green and gold colours, an ode to the sports kits of the Afri-can nation.
Coming into Qatar 2022, for the first time in tournament history, a piece of clothing has become the creative foundation for the mascot. Named ‘La’eeb’, it is inspired by the keffiyeh, a tradi-tional headdress worn by Arab men. ‘La’eeb’ in Arabic translates to ‘super-skilled player’, in an-ticipation of the hundreds of footballers about to land in the country.

Previous article
Man Utd roars back to sink Villa in EFL Cup
Next article
This Sunday, it’s 152/0 vs 170/0:Pak PM Sharif takes a dig at India
Must Read