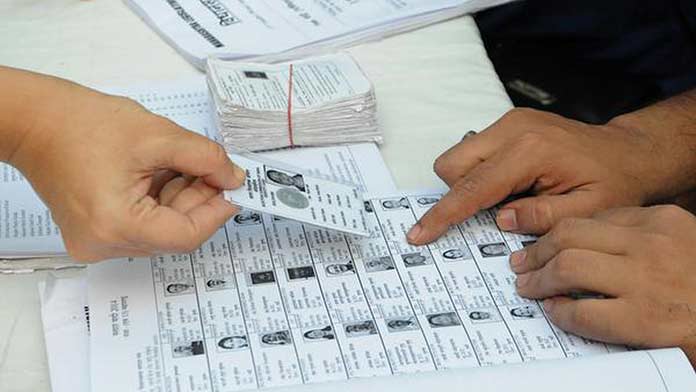 The Election Commission of India has set a new deadline of November 25 for the final date for publication of electoral rolls in Jammu and Kashmir. It said youngsters attaining the age of 18 years on October 1 or earlier will be eligible to become voters in the Union territory.
Earlier, the poll panel had given a timeline of October 31 for the publication of the finalised electoral rolls in J-K, where the special summary revision is being undertaken after a gap of three years and the first such exercise after the boundaries of assembly seats were redrawn in the delimitation exercise.
According to the rescheduled timeline issued by the Election Commission, an integrated draft electoral roll will be published on September 15. The period for filing claims and objections has been set between September 15 to October 25 followed by disposal of claims and objections on November 10. Checking of health parameters and obtaining the commission’s permission for final publication and updating database and printing of supplements has been fixed for November 19 before the publication of final electoral rolls on November 25, an Election Commission’s order, reproduced by the Chief Electoral Officer’s office here, said. In May, the central government had issued a notification stating that the orders of the Delimitation Commission which redrew electoral constituencies and provided six additional assembly seats to Jammu division and one to Kashmir would come into effect from May 20.
According to the orders of the Delimitation Commission, set up under the Jammu and Kashmir Reorganisation Act of 2019, the Union territory will have 90 assembly constituencies — 43 in Jammu Division and 47 in Kashmir Valley– with nine of them being reserved for the Scheduled Tribes.
Lt Governor Manoj Sinha had assured that the assembly elections will take place in Jammu and Kashmir after the completion of the ongoing revision of electoral rolls. However, political observers are of the opinion that the much-awaited polls are likely to be deferred to next year after the end of the harsh winter in the Kashmir Valley and the Chenab region.
“The ECI in pursuance of legal amendments in Section 14 (b) of the Representation of People’s Act 1950 and consequent modifications in Registration of Electors Rules whereby a provision for four qualifying dates (January 1, April 1, July 1 and October 1) as eligibility for youngsters to register in Electoral Rolls as opposed to earlier single qualifying date of January 1 only, has been made, revised the Special Summary Revision exercise for the UT of Jammu and Kashmir with reference to October 1, 2022 as qualifying date.
“This means that any person who attains the age of 18 years on or before October 1, 2022 and is otherwise qualified to be enrolled as an elector in the Electoral Roll, can apply for his registration during the Revision,” the order said.
It noted that presently, the pre-revision activities as well as post-delimitation follow up, work is going on in Jammu and Kashmir wherein the existing electoral rolls are being mapped into newly delimited assembly constituencies as per the Delimitation Commission’s final order made applicable by the Union Law Ministry with effect from May 20, 2022.
“As part of the pre-revision activities, the process of rationalisation/re-arrangement of Polling Stations, removal of discrepancies of Demographically Similar Entries/Photo Similar Entries, Duplicate EPIC, preparation of supplements and integrated draft rolls with reference to October 1, 2022 as the qualifying date is going on at present in J&K.
“The integrated draft rolls with reference to October 1, 2022 as qualifying date shall now be published by all Electoral Registration Officers (EROs) of the UT on September 15, 2022, marking formal beginning of the revision activities,” the order said.
In order to provide more opportunities to the youth of Jammu and Kashmir, the order said, the commission has extended the period for filing of claims and objections from 30 days to 40 days, i.e. September 15 to October 25, 2022.