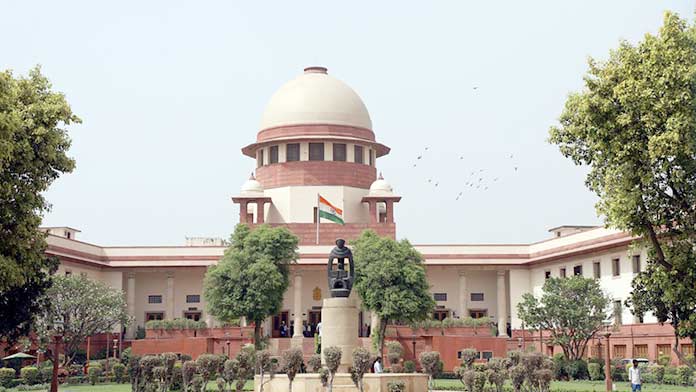 Calling forceful religious conversions a “very serious issue”, the Supreme Court on Monday, November 14, issued a notice to the Union government, asking it to make its stand clear on the issue.
The bench of Justice M.R. Shah and Hima Kohli was hearing a petition by advocate and BJP leader Ashwini Upadhyay seeking directions to the Union and state governments to take steps to control forced religious conversions.
Upadhyay’s plea contends that “there isn’t one district in the country that is free of religious conversion” either by force or through some form of inducement. It says that conversions are being done by “intimidating, threatening, deceivingly luring through gifts and monetary benefits and also by using black magic, superstition, miracles” and called on governments to take “stringent steps” to curb the practice.
It further alleges that most of the victims of forced conversions come from socially and economically marginalised communities and as such, the practice “offends” not only the fundamental rights enshrined in the Constitution, but also other constitutional principles, such as secularism.
In the last hearing in the case on September 23, the top court had sought responses from the Union government, the Ministry of Home Affairs and the Union Law Ministry by today, November 14, according to news agency PTI.
In the present hearing, the top court noted there may be freedom of religion, but no freedom from forced conversion.
It asked Solicitor General (SG) Tushar Mehta, what steps the Union government has taken in this regard. “Make your stand very clear, what action you propose to take. Conversion is legal under the Constitution, but not forcible conversion,” Live Law quoted the bench as saying.
Mehta submitted to the court that there are various legislations on the issue in states such as Madhya Pradesh and Orissa, and that the validity of these state laws have been upheld by the top court itself.
Further, SG Mehta provided instances in which individuals have been given provisions such as rice and wheat if they convert.
Noting that the government needs to step in, the bench said:
“The issue with respect to alleged conversion of religion, if it is found to be correct and true, is a very serious issue which may ultimately affect the security of the nation as well as the freedom of religion and conscience of the citizens. Therefore, it is better that Union government may make their stand clear and file counter on what further steps can be taken by Union and/or others to curb such forced conversations maybe by force, allurement or fraudulent means.”
As such, the court sought the Union government’s counter-affidavit by November 22 and slated the next hearing to take place on November 28.
Upadhyay had filed a similar affidavit with the Delhi high court which in July this year refused to direct the Union and Delhi governments to frame a law to stop the supposed forced conversions, saying that Upadhyay had not provided any concrete instances of forced conversions in his petition. It also noted that the Union and state legislature were free to draft such a legislation and that they “don’t need the court’s liberty or recommendation for it”.