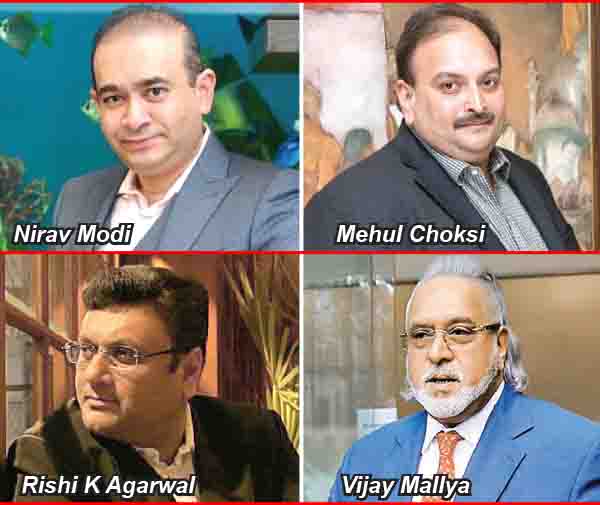 The NPA crisis seems far from over for India’s banks, both public and private, as another major financial fraud has come to haunt them just three years after the Nirav Modi case unfolded. This time, the scale of fraud is nearly double than that of Nirav Modi’s case in 2018.
In what is termed as the biggest banking fraud in India, the CBI has booked Gujarat-based ABG Shipyard Ltd and its former chairman and managing director Rishi Kamlesh Agarwal along with others for allegedly cheating a consortium of 28 banks of Rs 22,800 crore.
The firm took loans from these banks and the money was invested in overseas subsidiaries, for buying assets in affiliated companies and for transferring money to related parties.
The shipbuilding company, which turned into a non-performing asset (NPA) in 2013, also violated the terms of Corporate Debt Restructuring (CDR) — a mechanism in which the lender banks either reduce the interest rates on the loans of the distressed borrower company or increase the tenure of the repayment.
The Forensic Audit by Ernst and Young has shown that between 2012-17, the accused colluded together and committed illegal activities including diversion of funds, misappropriation and criminal breach of trust.
The loan account was declared as non-performing asset (NPA) in July 2016 and fraud in 2019. However, this is not the first time a major financial fraud has hit the banks, here are some of the banking frauds that shook India, and the public and private sector lenders in recent years:
Punjab National Bank scam: In 2018, Punjab National Bank, India’s second-largest lender, reported a fraud to the tune of Rs 14,000 crore. The fraud was then dubbed as the biggest fraud in India’s banking history. The key accused in the case were jeweller and designer Nirav Modi, Mehul Choksi, and others, including some PNB employees.
The firms belonging to Nirav Modi Group and some other firms owned by Gitanjali Gems purchased raw gems from overseas firms, and had to make payments to the sellers in foreign currency.
A junior official at PNB fraudulently issued ‘letters of undertaking’ (LoUs), allowing these firms to get short term loans from overseas bank branches to pay the sellers. Under the terms of the LoU, PNB was the guarantor of these loans.
The firms related to Modi would ask the PNB official to issue LoUs and get the foreign branches of the Indian banks to make payments to the sellers.
It later came to light that PNB officials misused the SWIFT network to send transaction request messages to other banks. As a result, the transactions were never recorded in the bank’s core system and higher authorities at PNB were unaware of the fraud.
The fraud came to light when the corrupt PNB official retired — the firms related to Modi and Gitanjali group again requested for fresh LoUs but were denied since the records did not mention any such arrangement. On further scrutiny, the fraud was exposed.
In all, foreign branches of 30 Indian banks were duped of Rs 11,400 crore by the Nirav Modi and Gitanjali firms. Modi escaped India days before the news of the scam broke out. He is currently in the United Kingdom and is seeking political asylum in Britain.
Vijay Mallya fraud case: Liquor baron Vijay Mallya, whose now-defunct Kingfisher Airlines owes more than Rs 10,000 crore to more than a dozen banks, fled India on March 2, 2016 the day some public-sector banks moved the Debt Recovery Tribunal against him.
The “King of Good Times” and his companies have been embroiled in financial scandals, and controversies since 2012. A group of 17 Indian banks are trying to collect approximately Rs 10, 000 crore in loans which Mallya has allegedly routed to gain stakes in about 40 companies across the world.
Mallya came under the radar of several agencies, including Enforcement Directorate (ED), Central Bureau of Investigation (CBI), Serious Fraud Investigation Office (SFIO) and the Securities and Exchange Board of India (SEBI) for charges including financial fraud and money laundering.
Started in 2005, Kingfisher Airlines was grounded in 2012 after rising debt burden made it impossible for the airline to continue operations.
In June 2016, the Prevention of Money Laundering Act (PMLA) court declared Mallya a ‘proclaimed offender’ on a request by the Enforcement Directorate (ED) in connection with its money laundering probe against him.
In January 2019, he was declared a fugitive economic offender under the Fugitive Economic Offenders Act.
The government is making efforts to extradite Mallya from the UK. Last week, the Supreme Court gave one last opportunity to Mallya to defend himself either personally or through a lawyer within two weeks. The top court told Mallya to present his stand or face contempt of court case if he fails to do so.
Mallya had filed an appeal in the UK Supreme Court in 2020 in the wake of losing an appeal in the London High Court against an extradition order to India. In 2020 the Indian government was notified that Mallya could not be currently extradited due to an unspecified “confidential legal matter”.

Videocon case: In 2019, the CBI registered an FIR against former ICICI Bank CEO Chanda Kochhar, her husband Deepak Kochhar and Videocon group MD Venugopal Dhoot over alleged irregularities in loans sanctioned by the bank to the group in 2012.
The same year, a panel headed by Justice BN Srikrishna found that Kochhar violated the bank’s code of conduct in the Videocon loan case.
The ICICI Bank had given Rs 3,250 crore in loans to Venugopal Dhoot’s Videocon Group, when Kochhar was leading the bank.
Videocon group had made around 28 proposals to the ICICI Bank, of which, around eight were sanctioned. Chanda Kochhar was part of the sanctioning as well as recommending committee in four such proposals made by the Videocon group, according to a report in Mint.
The ICICI Bank sanctioned loans worth Rs 1,875 crore to the Videocon Group and the companies associated with it between 2009 and 2011. Within months of sanctioning of the loans, Dhoot’s Supreme Energy had granted a loan of Rs 64 crore to NuPower Renewables, in which Deepak Kochhar owned a 50 per cent stake.