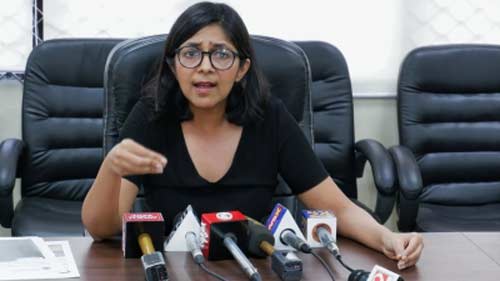 The Delhi Commission for Women (DCW) Chief Swati Maliwal on Saturday wrote a letter to Uttar Pradesh Chief Minister Yogi Adityanath, demanding a high-level inquiry and also setting up a high-level committee into the gang rape of a 38-year-old woman in Ghaziabad district.

Earlier on Wednesday, the DCW had issued a notice to the Ghaziabad’s Senior Superintendent of Police over the matter.

The victim from Nandnagari, Delhi, and had gone to Ghaziabad for her brother’s birthday celebration on October 16. While she was returning in the evening, while waiting for an auto, four people gang raped her in a car. They took the victim to an unknown location, where one more person was present. The accused brutally gang raped and tortured her for two days and inserted an iron rod in her private parts. Thereafter they hid her in a jute bag, tied up her arms and legs and threw her out on the road, the DCW said.

The DCW Chief in her letter has urged that an inquiry must be conducted to find out who caused injuries to the victim and who was responsible for inserting an iron rod-like object in her private parts, which was pulled out by the GTB Hospital in the national capital.

On the other hand, if it is proved beyond doubt that the girl was actively involved in conspiring against the accused men and she is not the victim but the perpetrator, then strict action should be taken against the woman under Section 182 of the IPC, Maliwal added.

She said, “The medico-legal examination (MLC) report of the woman from Ghaziabad indicates serious injuries. It said that she was tied with ropes, had bruises on her neck and thighs, was bleeding and a 5-6 cm iron rod was removed from her body. We (DCW) had issued a notice to the Uttar Pradesh Police over the matter. However, the Police claims that the case is false. This is quite “disturbing and shocking”.”

“Requested the Uttar Pradesh Chief Minister to constitute a high-level committee to probe the matter. If it is indeed proved that the girl had registered a fake case to settle the property dispute, then strict action will be taken against her,” Maliwal added.