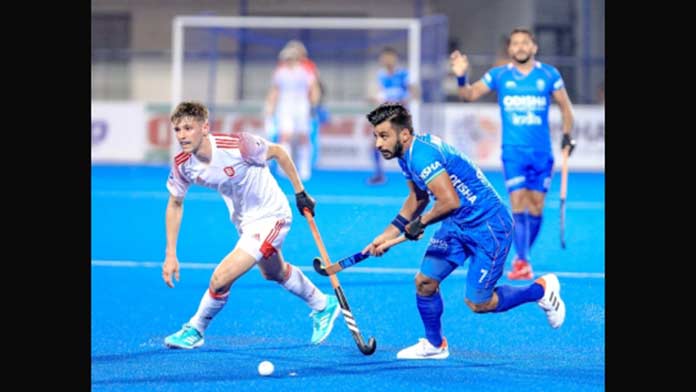 A positive response from the International Hockey Federation (FIH) to the draft Constitution for Hockey India and an election timeline has lifted the storm clouds and cleared the decks for the Men’s FIH Hockey World Cup, which is scheduled to be held in Bhubaneswar and Rourkela in January 2023.
Hockey India was, just like the All India Football Federation (AIFF), facing the threat of suspension from FIH for alleged third-party intervention in the governance of the sport in the country.
While the AIFF has been suspended by FIFA, putting the U-17 Women’s World Cup scheduled to be held in India in October in a limbo, Hockey India survived the threat as the FIH delegation accepted the principal changes in the draft Constitution, gave the Committee of Administrators (CoA) 10 days to submit the approved Constitution, and set a deadline of October 28 to complete the election process.
Even while the Indian men’s and women’s hockey teas were fighting for medals at the Commonwealth Games in Birmingham few days back, many Indian fans were worried over the future of the teams, considering the governance mess in the sport in the country.
The sport’s administration has been in turmoil since May this year when the Delhi High Court appointed a three-member Committee of Administrators (CoA) to govern Hockey India, realign the organisation’s Constitution with the National Sports Code, adopt the new Constitution, and conduct elections for the new governing body.
The CoA was appointed as the federation was judged to be in violation of the National Sports Code after the high court ruled as illegal the life membership with voting rights bestowed upon former FIH President Narinder Batra and Hockey India CEO Elina Norman.
The FIH was unhappy with the timelines set by the CoA for adapting the new Constitution and conducting the elections thereafter, thus raising the spectra of penal action.
Any suspension of Hockey India would have had an impact on the 2023 Men’s World Cup. But with the FIH delegation setting a new deadline and the CoA in a position to meet the same, the organisers of the World Cup can now heave a sigh of relief.
Thus the World Cup can go ahead as per schedule from January 13-29, 2023 at the Kalinga Stadium in Bhubaneswar and the Birsa Munda International Hockey Stadium in Rourkela, which is under construction.
The 15th edition of the prestigious tournament, the top competition in field hockey, will feature 16 teams. The previous edition of the Men’s World Cup was also held in Bhubaneswar in 2018 when Belgium emerged as the first-time champions.
Since then, the Red Lions have gone from strength to strength and have added the 2020 Tokyo Olympics gold to their crown.
Besides hosts India, the 2023 edition will feature holders Belgium, World No. 1 Australia, the Netherlands, Germany, England, Spain, France, Wales, South Africa, Argentina, Chile, New Zealand, Malaysia, South Korea and Asian Games champions Japan.
The qualifying process concluded just a few weeks back and the FIH will soon release the groupings and schedule.
The event will be a big test for the Indian men’s team to keep up the momentum it had gained in Tokyo after winning an Olympic medal after a gap of four decades.
For the likes of Australia and the Netherlands, it will be an opportunity to dethrone the Belgians ahead of the 2024 Paris Olympics.
India performed well at the Commonwealth Games, though the 0-7 defeat in the final against Australia was a huge dampener.
The team will start afresh for the World Cup at the end of August after a couple of weeks of rest with coach Graham Reid opting for a bigger pool of players from which he will pick a new core group.
The camp will be held at the SAI Centre of Excellence in Bengaluru before moving to Bhubaneswar in December ahead of the big event.
In the build-up phase, the team will participate in the FIH Pro League and will also play in the Sultan Azlan Shah Cup in November.