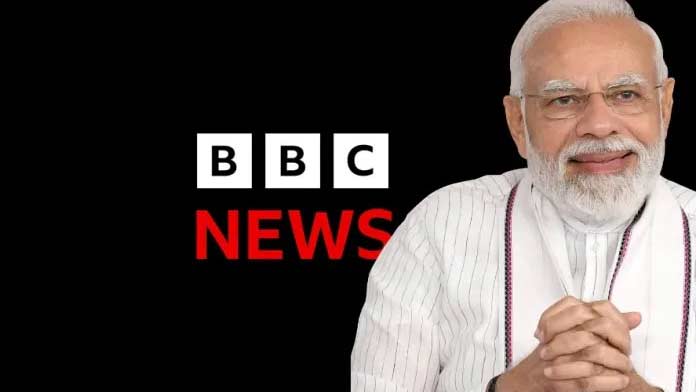 The Centre has issued directions for blocking multiple YouTube videos and Twitter posts sharing links to the BBC documentary “India: The Modi Question”, sources said.
The directions were reportedly issued by Apurva Chandra, Secretary, Ministry of Information and Broadcasting on Friday using the emergency powers under the IT Rules, 2021.
Sources said senior officials of several ministries, including external affairs, home affairs, and information and broadcasting, examined the documentary and found it to be an attempt to cast aspersions on the authority and credibility of the Supreme Court, sow divisions among various Indian communities, and make unsubstantiated allegations regarding actions of foreign governments in India.
They said the documentary was found to be undermining the sovereignty and integrity of India, and having the potential to adversely impact friendly relations with foreign states as also public order within the country. Orders have also been issued to Twitter for blocking of over 50 tweets containing links of the YouTube videos concerned, they said, adding that social media platforms have complied with the directions.

A group of 302 former judges, ex-bureaucrats and veterans on Saturday slammed a BBC documentary on Prime Minister Narendra Modi as a “motivated charge sheet against our leader, a fellow Indian and a patriot” and a reflection of its “dyed-in-the-wool negativity and unrelenting prejudice”. They claimed it is the archetype of past British imperialism in India setting itself up as both judge and jury to resurrect Hindu-Muslim tensions that were overwhelmingly the creation of the British Raj policy of divide and rule. The two-part BBC documentary “India: The Modi Question” claims it investigated certain aspects relating to the 2002 Gujarat riots when Modi was the chief minister of the state. This documentary is not a neutral critique and is not about exercising creative freedom or a divergent, anti-establishment point of view, a statement signed by 13 former judges, 133 ex-bureaucrats, including diplomats, and 156 veterans said. “Not only is the BBC series, judging from what we have seen of it so far, based on delusional and evidently lopsided reporting, but it presumes to question the very basis of the 75-year-old edifice of India’s existence as an independent, democratic nation, a nation which functions according to the will of the people of India,” it said.
Their statement alleged that the BBC series reeks of motivated distortion that is “as mind-numbingly unsubstantiated as it is nefarious”.

Cong slams govt for censorship
The Congress on Saturday criticised the government for the “censorship” of a BBC documentary on Prime Minister Narendra Modi, asking why had then prime minister Atal Bihari Vajpayee reminded Modi of ‘raj dharma’ after the 2002 Gujarat riots.
Congress general secretary in-charge communications Jairam Ramesh said on Twitter, “PM and his drumbeaters assert that the new BBC documentary on him is slanderous. Censorship has been imposed.”
“Then why did PM Vajpayee want his exit in 2002, only to be pressured not to insist by the threat of resignation by Advani?” he said.
Why did Vajpayee remind him of his ‘raj dharma’, Ramesh asked.
The Congress leader also attached a video clip of Vajpayee talking about “raj dharma” with the then Gujarat chief minister, Modi, sitting next to him.