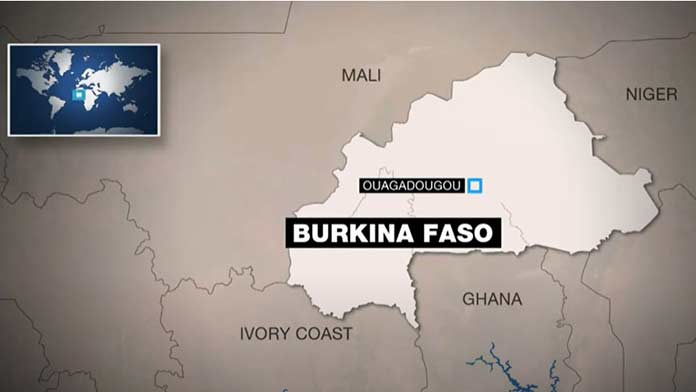 Gunshots rang out Saturday in Burkina Faso’s capital amid signs of lingering tensions a day after a group of military officers overthrew the man who had seized power in a coup only nine months earlier.
Roads remained blocked off in Ouagadougou, where a helicopter could be heard flying overhead. An internal security analysis for the European Union seen by The Associated Press said there was “abnormal military movement” in the city.
As uncertainty prevailed Saturday, the international community condemned the ouster of Lt. Col. Paul Henri Sandaogo Damiba, who overthrew the country’s democratically elected president in January. The African Union and the West African region bloc known as ECOWAS sharply criticized the developments.
“ECOWAS finds this new power grab inappropriate at a time when progress has been made,” the bloc said, citing the recent agreement Damiba had made to return to constitutional order by July 2024.
After taking power, Damiba made promises to end the Islamic extremist violence that has forced 2 million people to flee their homes in Burkina Faso. But a group of officers led by Capt. Ibrahim Traore said Friday that Damiba had failed and so was being removed as interim president. The new junta leadership said it would commit “all fighting forces to refocus on the security issue and the restoration of the integrity of our territory.”
But it remains to be seen whether the junta can turn around the crisis. Concerns already were mounting Saturday, though, that the latest political volatility would further distract the military and allow the jihadis to strengthen their grip on growing swaths of the once peaceful country.
Earlier this month, Damiba had addressed the nation and told the Burkinabe people that “our efforts have begun to bear fruit at the military operational level.” Only two days later, a roadside bomb struck a military convoy in the north, killing at least 35 people.
This week, at least 11 soldiers were killed and 50 civilians went missing after gunmen attacked a supply convoy in Gaskinde, a commune in Soum province in the Sahel.
“Faced by the continually worsening security situation, we, the officers and junior officers of the national armed forces, were motivated to take action with the desire to protect the security and integrity of our country,” said the Friday statement read by junta spokesman Capt. Kiswendsida Farouk Azaria Sorgho.
“A meeting will be convened to adopt a new transitional constitution charter and to select a new Burkina Faso president be it civilian or military,” the statement continued.
Friday’s developments felt all too familiar in West Africa, where a coup in Mali in August 2020 set off a series of military power grabs in the region. Mali also saw a second coup nine months after the August 2020 overthrow of its president, when the junta’s leader sidelined his civilian transition counterparts and put himself alone in charge.