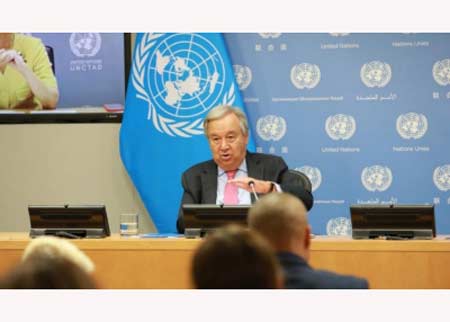 UN Secretary-General Antonio Guterres has urged parties to the conflict in Ethiopia to take concrete steps to implement the recently signed peace agreement, his spokesman said.

The African Union (AU) announced on Saturday that after a four-day meeting sponsored by the organization, senior commanders of the Ethiopian government and the Tigray People’s Liberation Front (TPLF) have agreed to facilitate humanitarian access in conflict-hit parts of the country, reports Xinhua news agency.

The parties to the conflict have agreed to promote unhindered humanitarian access for all in need in Tigray and neighbouring regions, and facilitate the movement of humanitarian aid workers, the AU said.

Guterres welcomes Saturday’s agreement between the parties and reiterates the United Nations’ readiness to support, said Stephane Dujarric, spokesman for the UN chief, in a statement.

The Secretary-General calls on the parties to “move ahead as a matter of urgency in translating this agreement into concrete improvements for civilians on the ground”, including accelerating the facilitation of humanitarian access and the restoration of essential services, the spokesman said.

The Ethiopian government and the TPLF have formally agreed to the cessation of hostilities and orderly disarmament as the two parties on November 2 announced an agreement to end the two-year-long conflict in northern Ethiopia.

The second most populous nation in Africa has seen a devastating conflict between government-allied troops and forces loyal to the TPLF since November 2020, which has left millions in urgent need of humanitarian assistance.