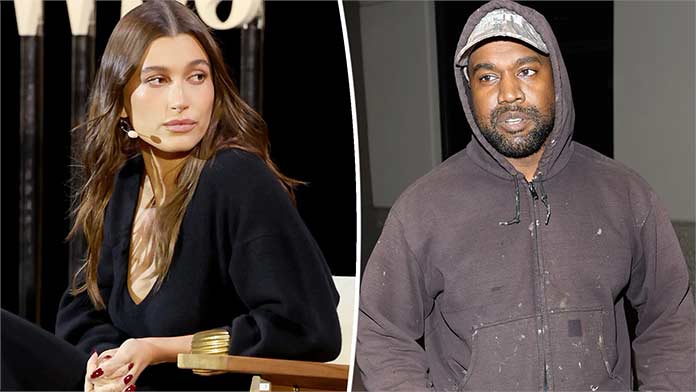 Model Hailey Baldwin has denounced Kanye West over his controversial anti-Semitic comments after the rapper attacked her online.
The model wife of Justin Bieber made use of her Instagram account to address the Yeezy designer’s rant, reports aceshowbiz.com.
“You cannot believe in God and be anti-Semitic,” Hailey penned in an Instagram Story on October 25.
“You cannot love God and support or condone hate speech. To love God is to love people. ALL people.”
The 25-year-old beauty also shared a picture reading: “I support my friends and the Jewish people.”
Her post came after Kanye dissed her in a now-deleted Instagram post.
In the post, the 45-year-old hip-hop star blasted Hailey and Gigi Hadid while gushing over model and influencer Vinetria.
“’THEEYY’ don’t want undeniable beautiful Black women to be put on their rightful throne,” he said. “They want corny a** Gigi Hadid and nose job Hailey Baldloose to rally behind an obvious Corey Gamble level nonfashion industry plant,” he wrote.
Prior to that, Gigi and Hailey defended Vogue editor Gabriella Karefa-Johnson after he fired back at the latter for criticising his controversial design.
On October 4, Hailey wrote on Instagram Stories: “My respect for you runs deep my friend!” The Rhode founder went on to say: “To know is to adore you and to work with you is an honour. the most kind. the most talented. the most fun. the most chic.”
As for Gigi, the mom of one wrote in a comment on Kanye’s post: “You wish u had a percentage of her intellect. You have no idea hahaa. If there’s actually a point to any of your s**t she might be the only person that could save u. As if the ‘honor’ of being invited to your show should keep someone from giving their opinion..? Lol. You’re a bully and a joke.”
Gigi further unleashed on the ex-husband of Kim Kardashian on her own Instagram Story. Calling him out for his “immature bully behaviour,” she warned people about how “dangerous” it was to constantly give him a platform to air his controversial views.
The model also described the writer as “one of the most important voices in our industry,” and argued that Gabrielle could “school that disgraceful man in more ways than he knows.”
(IANS)

No point in economic reforms when we don’t have an economy: Wickremesinghe

Indonesia’s Parliament votes to ban sex outside of marriage

4-lane package-I to be completed this year: Gadkari